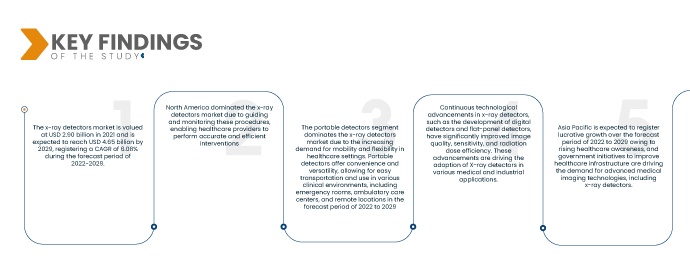 The global x-ray detector methods market is highly concentrated to a few big players and rest to local players who cater to domestic markets only. VAREX imaging Corporation is going to dominate the global x-ray detector market following with PerkinElmer Inc., and Canon Inc. Some of the other players are Amptek, Inc., Moxtek, INC., Rigaku Corporation, Teledyne Dalsa, Detection Technology OYJ, Thales Group, Fujifilm Holdings, and Agfa-Gevaert Group among others.

Incorporated in 1937 and headquartered in Waltham, U.S., The company operates through two reportable business segments, namely, Human Health and Environmental Health. PerkinElmer markets its products through its sales representatives in approximately 35 countries and and an extensive network of distributors in about 150 countries throughout the world. The company has manufacturing and assembly plants, research laboratories, administrative offices and other facilities in 15 states in the US, and in 36 other countries. As of December, 2015, it had operational presence in 126 centers. Geographically, the company operates in two major regions, namely, the US and International. Its major international markets include China, the UK, Germany, France, Japan, Italy, and Other International markets.