Cancer is the leading cause of death worldwide, which results in nearly 10 million deaths in 2020, or nearly one in six deaths. The most commonly occurred cancers are breast, lung, colon and rectum and prostate cancers. About one-third of deaths from cancer are because of tobacco use, alcohol consumption, low fruit and vegetable intake, high body mass index, and lack of physical activity. The infections that are caused by cancer, such as human papillomavirus (HPV) and hepatitis, are responsible for around 30% of cancer cases in low- and lower-middle-income countries. Most of the cancers can be cured if detected early and treated effectively.

Cancer is a leading cause of death globally, accounting for nearly 10 million deaths in 2020. The most common in 2020 (that is, in terms of new cases of cancer) is explained below: 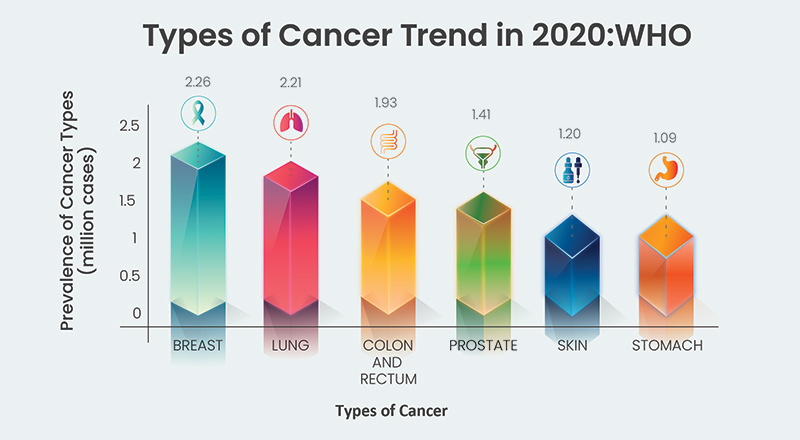 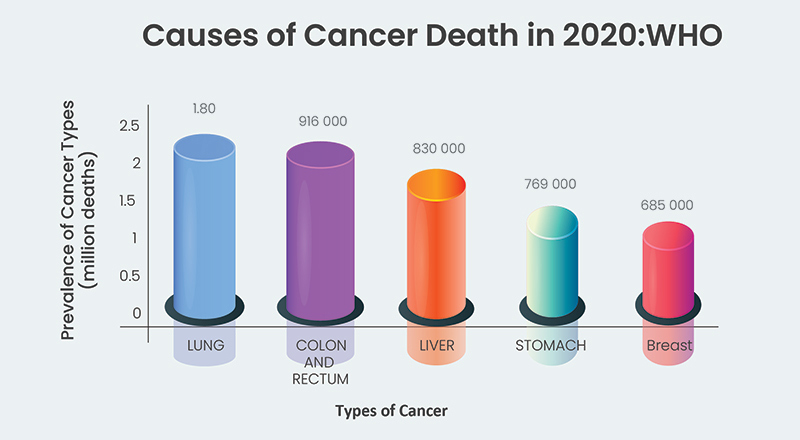 Tobacco use, alcohol consumption, unhealthy diet, physical inactivity and air pollution are the major risk factors for cancer and other non-communicable diseases. Besides these, some chronic infections also pose a threat for cancer, this phenomenon is commonly seen in low- and middle-income countries. Around 13% of cancers diagnosed in 2018 worldwide were attributed to carcinogenic infections, such as Helicobacter pylori, human papillomavirus (HPV), hepatitis B virus, hepatitis C virus, and Epstein-Barr virus. Hepatitis B and C viruses and some other types of human papillomavirus upsurge the risk for liver and cervical cancer, respectively.

To know more about the study, kindly visit: https://www.databridgemarketresearch.com/reports/global-cervical-cancer-diagnostic-market

Infection with HIV rises the risk of developing cervical cancer six-fold and significantly surges the risk of developing select other cancers such as Kaposi sarcoma. Early diagnosis is necessary as it will fasten the recovery process. Substantial improvements can be made in the lives of cancer patients by detecting cancer early and evading delays in care. Early diagnosis can be made in three different components which are being aware of the symptoms of different types of cancer and of the importance of seeking medical advice when abnormal findings are witnessed; access to clinical evaluation and diagnostic services; and timely referral to treatment process.

Our DBMR team has investigated the cancer diagnostics market and witnessed that North America dominates the cancer diagnostics market due to the increasing presence of numerous biotechnology and medical device companies, increased funding available for research and development projects, and the region's high adoption of advanced technologies. Additionally, rising capital investments and low benefit-cost ratio for biomarkers, rising helium shortage and rising risk of high radiation exposure likely to limit the use of CT scanners are among the major factors obstructing market growth.

To know more about the study, kindly visit: https://www.databridgemarketresearch.com/reports/global-cancer-diagnostics-market

Recently, on the basis of PATHFINDER study, ESMO published an article which stated that accuracy of multi-cancer early detection (MCED) blood testing have major implications for future cancer care provision.

Multi-cancer early detection (MCED) tests is really helpful in early detection of cancer. The blood sample is tested for specific pieces of DNA or proteins from cancer cells. Some MCED tests are performed to confirm the possibility of a person having cancer. Therefore if a person has a positive test result, they will need other tests, such as imaging tests, to try to figure out where in the body the abnormal DNA or proteins came from.  There are numerous companies developing and studying MCED tests, but these tests are not yet FDA cleared or approved. Although, some of these tests critically fall under the Clinical Laboratory Improvement Act (CLIA) regulations as lab-developed tests, that can be used by qualified healthcare professionals. Many﻿of the companies developing these tests are collecting data and are eventually to get FDA approval.

Approximately 6,662 individuals aged 50 and older were involved in the study.

The performance of the MCED test was based on the positive predictive value (PPV). It means that the percentage of confirmed cancer cases from the number of cancer-signal detections, and the accurate prediction of the cancer signal origin (CSO).

The prediction was 97% accurate, with resolved cancer diagnoses within three months for 73% of the true positive signal detections. Both MCED versions showed a high true negative rate of above 99%. The researchers believe that the refined version achieved the intended goal of decreasing false positives.

The above study showed a very promising route to make multi-cancer screening clinically and economically feasible. The MCED blood tests are meant to improve the chances of early detection of cancer, therefore improving the outcomes of cancer therapy. This is projected for people belonging to elevated cancer-risk groups, such as people who are above 50 years of age, and is suggested for use in addition to standard cancer screening methods such as colonoscopy, mammography, cervical cancer screening, and prostate-specific antigen tests. It is also important to note that the purpose of cancer screening is not to decline the occurrence of cancer, but rather to reduce cancer mortality. It is advisable to have continued standard screening for tumors, such as breast and colorectal cancer, while MCED tests should be used and validated for cancers such as pancreatic, small bowel and stomach cancer where there are currently no screening options.