API intermediates are used against a range of chronic and acute diseases such as Alzheimer's diseases. According to the Alzheimer's Association, 5.8 million people in the United States will have Alzheimer's disease by 2020. This disease is the sixth biggest cause of death in the United States, and it is more common in persons over the age of 65. This number is predicted to rise to 14 million by the time the baby-boomer generation reaches 65 years old, aggravating the situation over the projection period. Every 33 seconds, a new case of the disease is projected to emerge by 2050. ​

Global API intermediates market is expected to reach USD 37,423.56 million by 2028 from USD 23,705.73 million in 2020, growing with a CAGR of 6.4% in the forecast period of 2021 to 2028. Increasing demand for advanced medical technologies for diagnostic and treatment purposes and the rising healthcare expenditure and government support and the rising number of chronic diseases are some of the drivers boosting the growth of the market. Moreover, extensive research is going on to provide an innovative and highly safe treatment for the API intermediates which will also act as an important determinant. Rising geriatric population base, increasing awareness about the availability of treatment options in the developing economies and rising personal disposable income are some other important market growth determinants. 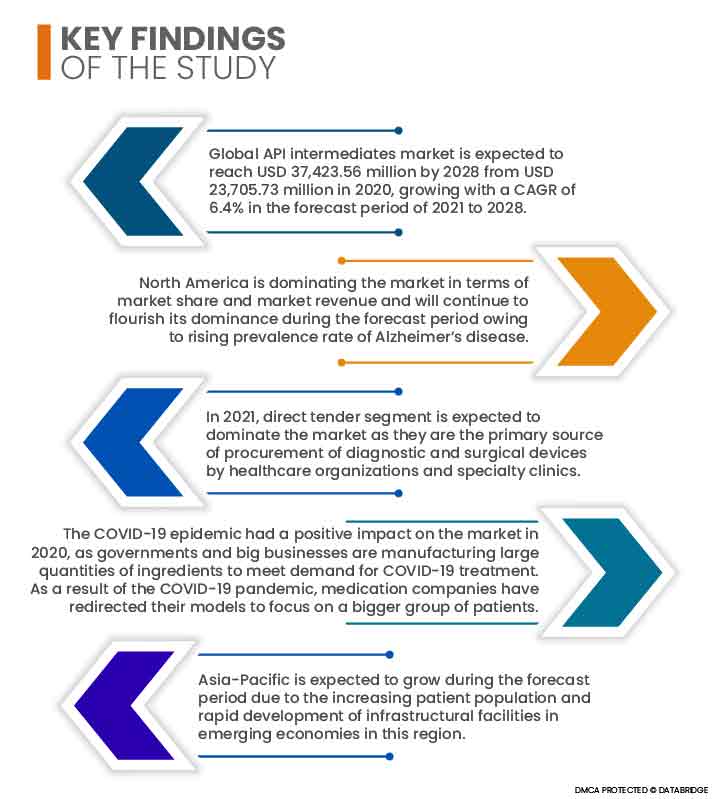 With the growing geriatric population, chronic and other age-related diseases are also increasing. The elderly population brings a greater chance of health issue, the rapid growth in geriatric population are more prone to various types of disorders. The high prevalence of chronic diseases such as cancer, diabetes, cardiovascular disease, respiratory diseases, and many other diseases, which are now a day's burden to both the market players, physicians and patient population, will act as a vital market growth determinant. Increased expenditure by public and private players on the development of healthcare infrastructure will also promote the market growth rate. Continuous research and development pertaining to the deployment of advanced healthcare technologies will widen the scope of growth.

Global API intermediates market is categorized into six notable segments which are based on the type, product, therapeutic type, customers, end user, and distribution channel

In 2021, direct tender segment will emerge as the dominating segment with 66.3% market share. This is because of the cost of healthcare; healthcare service providers are focusing on better services for customers along with reducing the overall cost. Also, growth and expansion of the direct tender distribution channel will yet again bolster the growth and dominance of this segment.

North America is dominating the global API intermediates market in terms of market share and market revenue and will continue to flourish its dominance during the forecast period. Because of growing healthcare expenditure and well-established healthcare infrastructure for the pharmaceutical/bulk drug intermediates segment, the United States dominates the North American API intermediates market and is predicted to grow at the fastest rate from 2021 to 2028. The U.S is dominating in North American market due to rise in use of medical devices and increasing awareness towards their health. Also, existence of advanced healthcare technologies in this region is another reason for this region's dominance in the global market.

Asia-Pacific is expected to grow during the forecast period due to the increasing patient population and rapid development of infrastructural facilities in emerging economies in this region. In addition to this, rising private and public expenditure on the development of healthcare industry infrastructure in the developing and backward economies and increasing per-capita income are expected to propel the market's growth rate in this region. China is expected to dominate the Asia-Pacific region due to the rising investments and the increased funding for the development of manual resuscitators. Also, the increasing geriatric population base, surging incidence rate of chronic and acute disorders and diseases, and rising medical tourism are important market growth determinants.

The COVID-19 epidemic had a positive impact on the market in 2020, as governments and big businesses are manufacturing large quantities of ingredients to meet demand for COVID-19 treatment. As a result of the COVID-19 pandemic, medication companies have redirected their models to focus on a bigger group of patients. For example, the United States demanded that India import hydroxychloroquine (HCQ) to treat coronavirus. The virus has also impacted Canada's medicine supply system, potentially causing complications for patients. Canadian pharmaceutical companies are expanding their partnerships with nations other than China to get access to new markets.