In November 2019, Algarithm Launched a Program for Enhancing the Awareness Regarding the Kappamega3 Product, which Comprises of Omega-3 DHA Oil Derived from Microalgae

Microalgae cultivation is done on large-scale for the production of high-quality dietary products. Microalgae are exploited for its high protein content, which has fulfilled the unmet diet demand of growing population. Along with dietary components, microalgae comprises several other bio-active components with anti-oxidative, anti-carcinogenic and anti-hypertensive properties. Microalgae are utilized from thousands of years due to its high dietary content.

Global Microalgae Market is expected to reach USD 2,706.94 million by 2030 from USD 1,587.29 million in 2022 growing with a substantial CAGR of 6.90% in the forecast period of 2023 to 2030. Increasing concerns about greenhouse gas emissions have accelerated the adoption of renewable energy sources, a popular one being microalgae. Increasing R&D investments in microalgae production along with rising demand of alternative source of food due to increased worldwide population has driven the growth of the market. High cost of extraction of essential components from algal biomass and adverse impact of climatic variations on microalgae production restrain the market growth. 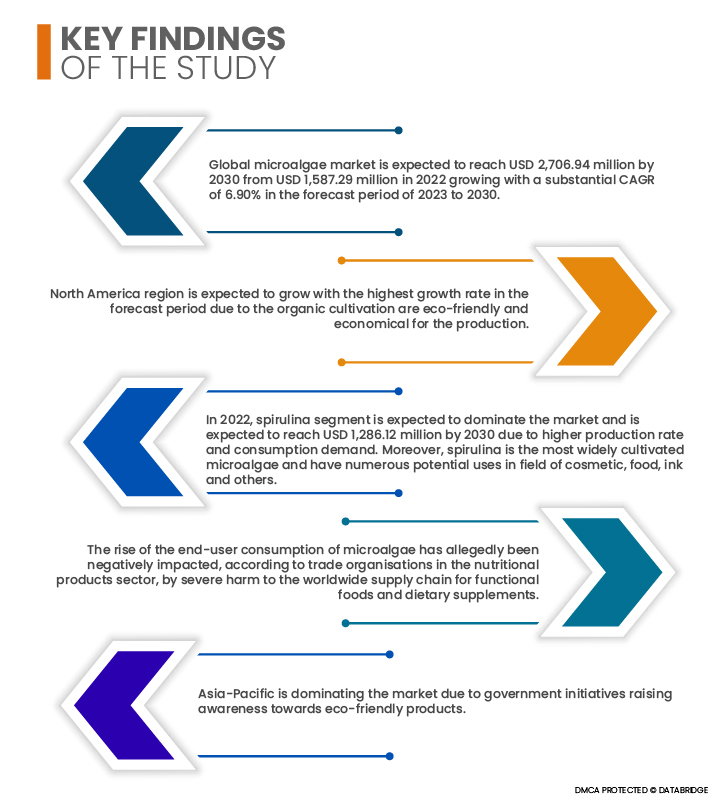 The increasing trend of plant-based food and rising health related issues has increased the chances of microalgae based product to dominate the market with its nutrition rich products serving the demand of consumers in various domains of life ranging from human food to animal feed and nutrition to biofuel. Thus, the increasing awareness among consumers about health benefits of algae products acts as driver for the growth of the global microalgae market.

The microalgae market is categorized into seven notable segments which are based on the product type, microalgae strain, category, form, grade, application, and distribution channel.

The dietary supplements segment will emerge as the dominating segment application segment. This is because of the growing number of dietary supplements in the market especially in the developing economies. Further, growth and expansion of research development services on a global scale will further bolster the growth of this segment.

The direct segment will emerge as the dominating segment under distribution channel. This is because of the growing number of infrastructural development activities in the market especially in the developing economies. Further, growth and expansion of the healthcare industry all around the globe will further bolster the growth of this segment.

North America region is expected to grow with the highest growth rate in the forecast period due to the organic cultivation are ecofriendly and economical for the production.

Asia-Pacific is dominating the market due to government initiatives raising awareness towards ecofriendly products.

According to trade organizations in the nutritional products sector, the rise of the end-user consumption of microalgae has allegedly been negatively impacted by severe harm to the worldwide supply chain for functional foods and dietary supplements. Due to logistical and shipping challenges, the sale of microalgae in the first quarter of 2020 was considerably delayed. Along the entire value chain, there were disruptions in the raw material supply for culture medium, manufacture, packaging, and biomass delivery. 2020 saw the onset of the COVID-19 pandemic's effects on this market in China, one of the world's major producers and consumers of microalgae species.

For more detailed information about the microalgae market, visit: https://www.databridgemarketresearch.com/reports/global-microalgae-market