Key Findings of the Study

Global population growth, rapid industrialization and urbanization all increase the demand for an adequate supply of electricity. Many governments prioritize the use of renewable energy sources in the energy production. Market participants are looking for ways to meet the rising demand for organic solar cells from consumers. The market for organic solar cells is increasing because of solar power facilities and photovoltaic technology advances in the developing countries.

Bilayer membrane heterojunction is expected to dominate the global organic solar cell (OPV) market with a 54.97% market share as in bilayer solar cells, many advances have been achieved through the use of various material combinations and the bilayer devices can exhibit good charge transport and power conversion efficiencies (PCEs).

Polymers are expected to dominate the global organic solar cell (OPV) market with a 66.16% market share as polymer solar cells are lightweight, potentially disposable, and inexpensive to fabricate. They are flexible and customizable on the molecular level and potentially have a less adverse environmental impact. Polymer solar cells also can exhibit transparency, suggesting applications in windows, walls, flexible electronics, and others.

The commercial is expected to dominate the global organic solar cell (OPV) market with a 46.85% market share as several commercial industries apply such pioneering technology to remarkable and innovative devices. For instance, the German Pavilion presented an outstanding example of a self-sufficient energy installation through the integration of OPVs in the architecture of the building. Solar cells were placed on the pavilion's membrane roofs to harvest energy during the day and then illuminate the pavilion at night. 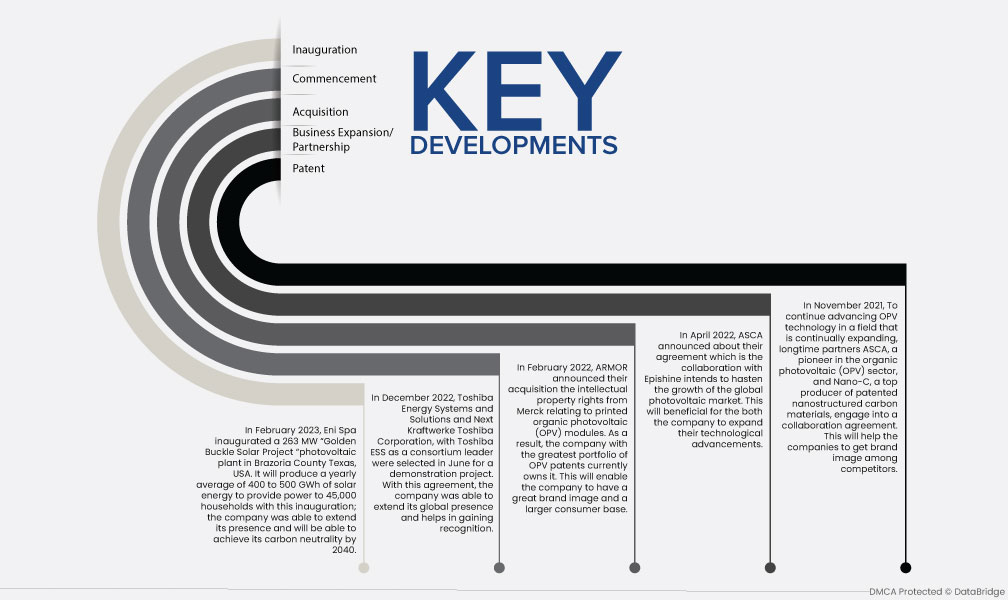 Asia-Pacific is estimated to show lucrative growth during the forecast period of 2022 to 2029 due to the tax breaks by government and subsidies to purchasers and producers of solar power equipment which stimulates the regional market.

The coronavirus pandemic has a significant negative effect on the global market for organic solar cells, affecting a variety of industries and manufacturing processes. The entire production of solar cells was hampered by the value chain disruption, which cost firms in the worldwide organic solar cell market enormous sums of money. The worldwide recession and a lack of workers have all hindered the expansion of the market. Players in the market are stepping up their attempts to make up for losses brought on by the COVID-19 epidemic, though, and they're also looking for new ways to get over market obstacles. The market for organic solar cells is being driven by a rise in market participants' initiatives to expand their product offerings.