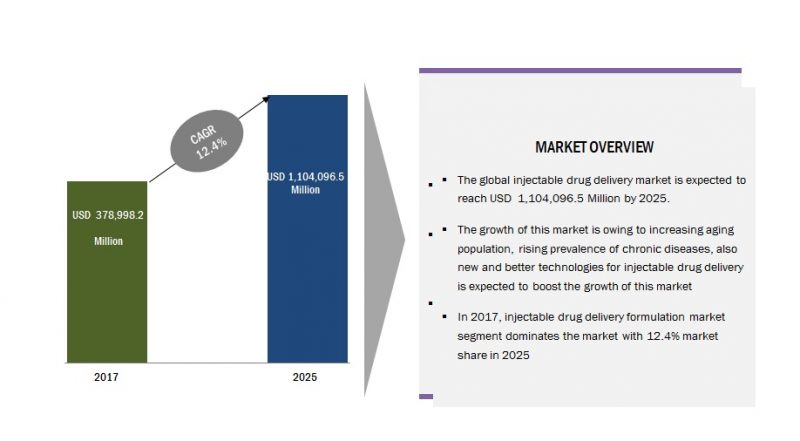 In 2016, Novartis Healthcare Pvt. Ltd launched an injectable drug, Scapho, in India for the treatment of psoriasis. This approval would mark a significant milestone in the treatment of psoriasis, providing a new and important first-line biologic treatment option for patients. Diseases like diabetes and cancer are considered to be the greatest threats globally, especially to populations in the BRICS (Brazil, Russia, India, China and South Africa) countries. China has the highest rate of diabetes diagnosis in the world due to growing westernization of lifestyle habits and diets. In many cases, diabetic patients may require about 90 to 100 insulin injections per month, making it more suitable for these patients to opt for home treatment. To support this demand, numerous companies are developing injectable formulations and devices that can be used at home. In April 2012, Ypsomed launched Mylife-DailyDose, a self-injection system for diabetic patients in six European countries—Switzerland, Germany, the U.K., Norway, Austria, and the Netherlands.  Also, in October 2011, Ypsomed Group (Switzerland) introduced Omnifill in Germany which is a reusable insulin pen distributed by B Braun. The launch was mainly aimed at helping Ypsomed to capture a significant share of the German market which was the largest market for insulin in Europe with 7.2 million cases of diabetes in 2014. Amylin analog and GLP-1 receptor agonists are non-insulin injectables for diabetic patients who requires constant monitoring multiple daily insulin injections to avoid disease complications like heart disease, kidney failure, vision or hearing loss. Cancer is another main cause for morbidity and mortality across the globe. Worldwide, more than 60% of the total new annual cases of cancer occur primarily in the regions of Africa, Asia, and Central and South America; these regions also account for around 70% of the total cancer deaths. In November 2014, Sandoz (Germany) launched a cyclophosphamide injection that contains chromatography agents to treat certain kinds of cancer among paediatric patients and adults. In the U.S., this injection is also used for the treatment of leukemia, lymphoma, and myeloma. These diseases accounted for 9.4% of the cancer cases estimated in 2014. This launch was intended to strengthen the product offerings of the company, in generic oncology injectables, which is a fast-growing market for injectable drug delivery. In 2013, a global action plan for the Control and Prevention of non-communicable diseases was launched by WHO. This action plan is aimed to reduce mortality caused by cancer, chronic, respiratory diseases, cardiovascular diseases, and diabetes by nearly 25%. Also, with the rising chronic disease the healthcare spending is also in per year, globally. By increasing the spending in preventing and providing treatment to most of the common chronic diseases will help in reducing the treatment cost and financial impact of the disease yearly. For instance, according to American Public Health Association, the U.S. could decrease the treatment cost of chronic diseases by USD 218 billion annually and reduce the economic impact of the disease by USD 1.1 trillion per year. Mention below is healthcare cost spend on chronic diseases:

With the increasing prevalence of chronic diseases, the demand for development and innovation of injectable drugs and devices is increasing. This growing demand has provided an opportunity for the pharmaceutical companies to focus on introducing various products in the market in order to meet the rising demand for injectable drug delivery systems. Due to this rising demand the pharmaceutical companies are focusing on developing formulation and devices for maximum utilization of drugs, reduction in health care costs through shorter treatment period, improved therapy, and less frequency of dosing in order to improve various chronic conditions like heart disease, cancer and diabetes which are the leading cause of mortality in the world. Also, as injectable are increasingly proving effective with rapid and effective dosage for such diseases, the market for injectable drug delivery is likely to grow at a higher rate in the coming years RISING DEMAND OF SELF-INJECTION DEVICES Self-injection devices are a combination of automatic injection systems with audio-visual guides for surgeries; this includes safety syringes and hidden needles, among others. It has also emerged as one of the fastest growing areas for unit dose medication in order to minimize drug waste and increase product lifespan. As patients are able to self-administer injectable drugs at their home instead of the regular visits to the hospital it improves safety and patient compliance, thus, making the injections easy, safe and convenient. It reduces anxiety eliminating needle phobia through various self-injection devices like auto injectors, pen injectors, needle-free injectors and wearable injectors. These self-injection devices imparts the drug faster and has better reproducibility as compared to invasive drug delivery systems and hence enhance bioavailability when compared with invasive drug delivery systems. Distant from the factor which has been mentioned above, the launch of various websites helps in educating people about needle tip placement and precise dosages, which will facilitate patients to administer injections without any assistance. This is another main factor that has led to the increase in demand for self-injection devices. In April 2015, B. Braun launched the Educational Injection Safety Monitoring (ISM) website, which aware people about the placement of needle tips and about local anesthetic injections in order to help them prevent neurological complications. Such initiatives would boost the demand for safe administration of self-injections. With the existence of a large number of injectable drugs and higher demand for self-injectables from patients, many pharmaceutical players are introducing innovative self-administration therapies. In February 2013, Novo Nordisk launched NovoSeven (Recombinant factor VIIa) with a prefilled syringe system that is used for the treatment of hemophilia. Also, Autoject 2 is an automated injection device of Owen Mumford Company enabling effective drug delivery at a touch of a button to encourage patient’s self-reliance by concealing the needle in order to guard against accidental injury.

North America Injectable Drug Delivery Market is Poised to Grow at 11.0% to 2024

Asia-Pacific (APAC) Injectable Drug Delivery Market is Poised to Grow at 12.4% To 2024

Europe Injectable Drug Delivery Market Poised to Grow At 11.9% till 2024

Global Injectable Drug Delivery Market is Expected to Grow by CAGR 11.5% In The Forecast Period 2017 To 2024