Europe Quantum Computing Market is expected to grow with the CAGR of 29.1% in the forecast period of 2020 to 2027. The years considered for study are as mentioned below: 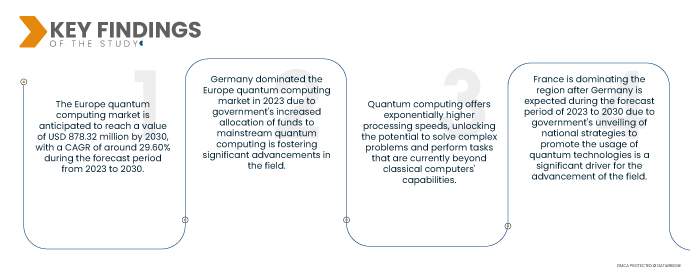 Accenture is headquartered in Dublin, Ireland which was established in year 1989. The company is engaged in providing strategy, consulting, digital, technology and operation services in management consulting and professional services. The company offers various industries categories such as strategy, operation, consulting, digital, and technology while technology is focused category. They operate their business through communications, media and technology; financial services; health and public service, products, resources and others while communications and media and technology is the focused category.

Alphabet Inc. is headquartered in California, U.S. which was established in 2015. The company is engaged in conducting research that advances the state-of-the-art in the field of AI. The company offers wide range of product categories such as research, education and tools among which research is focused category. They operate their business through Google and bets while Google is focused category.

The company has wide global presence across the globe such as North America, South America, Europe, Middle East and Africa, Asia-Pacific. In addition to it, the company also generates its revenue from the various subsidiary companies such as Google (U.S.), Verily Life Sciences LLC (U.S.), Calico LLC (U.S.), and Waymo LLC (U.S.) among others.

IBM Corporation is headquartered in New York, U.S. which was founded in 1911. The company is focuses on creating innovation that matters for the world, building trust in all relations, and dedication to every client. The company has product categories which are watson, cloud, services, security, research and IT infrastructure in which research is market focused category. They operate their business through cognitive solutions, global business services, technology services & cloud platforms, systems, global financing and other among which technology services & cloud platforms is the focused category.

The company has global presence in Europe, North America, Latin America, Africa and Asia-Pacific. In addition to it, the company also generates its revenue from the various subsidiary companies such as IBM India (India), IBM Research (U.S.), Algorithmics Inc. (Canada), IBM Canada Limited (Canada), IBM Israel (Israel) among others.