According to the International Diabetes Federation (IDF), roughly 536 million persons (aged 20 to 79) worldwide had diabetes in 2021, and this number is expected to climb to 783 million by 2045. The increasing prevalence of the condition demands pharmaceutical treatment, which boosts pharmaceutical excipient production and market growth. An growth in the number of chronic diseases, higher awareness of physical well-being, and rising incidence of lifestyle diseases such as diabetes and obesity-related disorders have all contributed to increased demand for medications around the world. This has spurred the demand for and production of medicines and excipients. Excipients are thought to aid active pharmaceutical components in achieving superior functionality, such as a longer shelf-life, as well as providing a competitive edge in formulation.

Data Bridge Market Research analyses that the excipients market is expected to grow at a CAGR of 6.0% in the forecast period of 2021 to 2028 and is expected to reach USD 11,244.15 million by 2028. The rising demand for multifunctional excipients and increased use of generic pharmaceuticals are predicted to be the main drivers of revenue growth. Excipients have been recognized as providing improved functioning and a competitive advantage in drug formulations, which has led to an increase in their use by pharmaceutical companies in recent years. The market has gotten a boost from ongoing research and the identification of ideal or near-ideal chemicals that can be used in therapeutic formulations and delivery. Another element driving global growth is the development of increasingly sophisticated excipients with a greater involvement in medication delivery by most pharmaceutical companies. 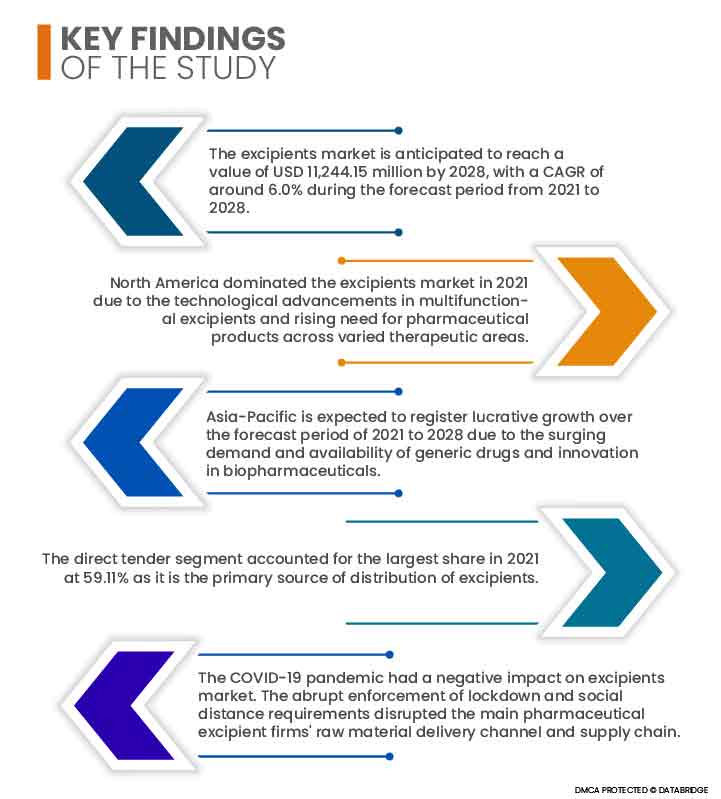 The surging demand for biopharmaceuticals is anticipated to enhance the demand for market's growth rate. Due to their closeness to natural biological substances found in the human body, biopharmaceuticals are becoming increasingly popular in the healthcare business. As a result, they provide great efficacy with fewer adverse effects. They are one of the pharmaceutical industry's fastest-growing segments. Novel approaches such as regenerative medicine are constantly being refined. This has opened the door to even further expansion in this industry. Pharmaceutical companies can command high costs for novel treatments because of the safety and efficacy associated with biopharmaceutical products and their capacity to treat previously untreatable diseases. This contributes significantly to their overall revenue.

In 2021, the organic segment of origin segment is anticipated to dominate the excipients market

In 2021, the organic segment of this market will dominate the excipients market due to non-toxic characteristic of organic chemicals used as excipients. The organic segment is expected reach the highest CAGR of 6.4% in the forecast period of 2021-2028.

In 2021, the direct tender segment is projected to hold the largest share of distribution channel segment in the excipients market

North America will continue to dominate the Excipients market in terms of market share and market revenue and will continue to flourish its dominance during the forecast period due to the presence of major key players and the increasing number of research activities in this region. U.S. is estimated to dominate the North American region due to the technological advancements in multifunctional excipients and rising need for pharmaceutical products across varied therapeutic areas.