Increasing consumer awareness regarding home safety devices and proper handling of several home devices such as AC, washing machine, TV, microwave oven, and other appliances is likely to boost the demand for protective films. There is also a growing trend towards making packaging products using protective films and increasing consumer experience on e-commerce platforms are estimated to increase the market's growth in the near future. 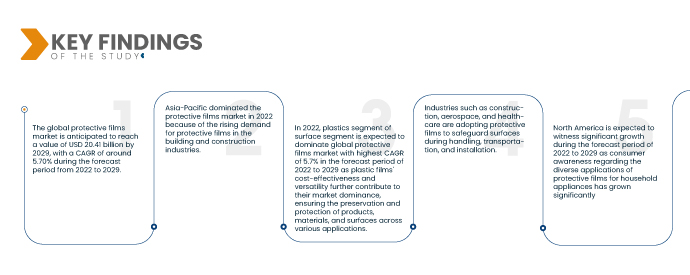 Nowadays, packaging is a joint coordinated system for producing several goods or products for secure and safe transport from one place to another. Packaging broadly plays a vital role in overall supply chain management. Packaging protects the goods or products from scratches, damage, cracks, and others. In fact, numerous manufacturers are adopting innovative and new of National Retail Federation in 2020; when it comes to consumer preference for shopping the most important parameters are price (30%) and quality (32%), and only 13% say about convenience.

In e-commerce packaging there is a broader demand for protective films products because these products mainly protect the products' surface from UV effects, scratches, dirt, pollution and other substances. The protective films are extensively made from plastic films such as polyethylene terephthalate, polyvinyl chloride, polyurethane, polyamide films. Plastic films are in high demand in developing as well as developed nations.

The protective films market is segmented on the basis of class, material, thickness, surface, texture and end-user

In 2020, the polyethylene segment is projected to hold the largest share of material segment in the protective films market

Polyethylene segment is expected to dominate global protective films market with 74.87% market share because it is extensively preferable in packaging industries. Polyethylene has high electric insulating property which increases its demand in construction industry. Moreover, high heat resistance capacity makes it extensively adoptable in manufacturing activities to upsurge the shelf life of the instruments.

In 2020, the bottle segment of thickness segment is anticipated to dominate the protective films market

0 - 2 MM segment is expected to dominate global protective films market with 55.35% market share due to the extensive adoptability of these thin sheets in cars headlights to protect them from scratches. 0-2 MM thickness sheet is widely used in electronics industries due to high usability of thin sheets in electronics products such as phone and TV screens to protect them from scratches, dust and other particles.

North America dominates the protective films market due to an increase in number of aging fleet and automobile sales. Furthermore, increasing consumer awareness regarding the different usage of protective films in house hold appliances to protect them from moisture and dust penetration is .expected further to enhance the market's growth rate in this region.

The outbreak of covid-19 had a negative effect on the global protective films market. All major economies have experienced a decline in economic development due to this pandemic which is also altering consumer purchasing patterns. International and National transportation have been hindered due to lockdown which has applied in numerous nations. This has also substantially influence the supply chain of the many sectors all over the world. The severe disruptions in several supply-chain and manufacturing operations owing to the many precautionary lockdowns which has imposed by governments to curb the spread of disease affected huge financial setbacks of the market. Furthermore, consumer demand has been dropped and people became more focused on eliminating non-essential expenses from their budgets, negatively impacting most people's general economic position.

On the other side, the situation is expected to improve as individual and government regulatory authorities around the globe begin to uplift regulations and relax these imposed lockdowns to allow industries to resume operations. As a result, the canceled and suspended operations have continued with several required regulations. Thus, the market is estimated to increase post-COVID.

DuPont, Arkema and 3M are Dominating in the North America Protective Films Market in 2019