According to the World Health Organization (WHO), mortality due to the exposure to lead and similar chemicals is approximately 1,303,100 annually all over the world. The respective number of deaths accounts for around 2.3% of the global annual deaths. Also, biological industries are associated with contaminants and organisms that could lead to death if the human body comes in contact with them. To control these cases, the consumers who work in biological and chemical industries use an extensive range of protective gloves. As a result, the demand for the protective gloves increase which eventually enhance the market growth.

Data Bridge Market Research analyses that the Protective Gloves Market is expected to reach USD 22,601,206.87 thousand by 2028 from USD 13,168,159.20 thousand in 2020 growing with a substantial CAGR of 7.20% in the forecast period of 2021 to 2028. Growing usage of power tools in industrial sector will provide potential opportunities for the market growth during the forecast period.

Growing demand to work in dangerous environments specifically repair, land clearing, trenching, earthmoving, digging, blasting, drilling, demolition, erection, routine maintenance, painting, and concreting has led to augmented use of protective gloves. For instance, Sarah Constructions has distributed poster for hand safety awareness titled ‘Five Steps to Hand Safety’ to all of its sites in Australia. The company also involves subcontractors to identify specific controls that control hand injuries in all Job Safety Environmental Analyses (JSEA) and Safe Work Method Statements (SWMS). Furthermore, government of various nations have made it compulsory for the construction and manufacturing sector to follow safety rules and standards thus increasing the demand for protective gloves during the forecast period.

The protective gloves market is segmented on the basis of product, type, application, distribution channel and end user.

The healthcare segment of end-user segment is anticipated to dominate the protective gloves market. 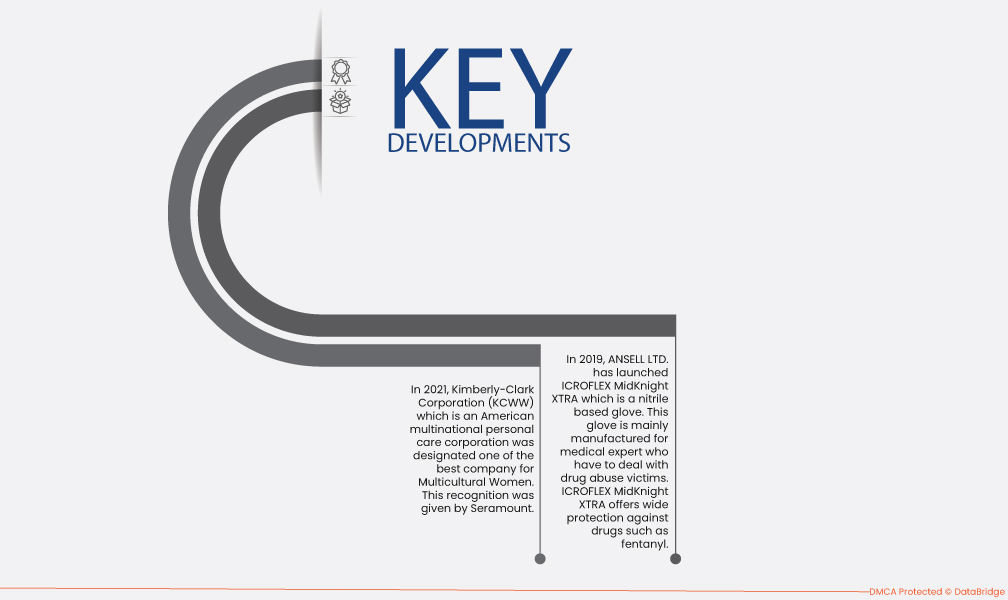 North America dominates the protective gloves market due to the increasing demand for goods with multi-tasking abilities. Moreover, various government safety measures such as the Occupational Safety and Health Act, which goals to provide safety of working women and men at the workplace by providing protective gloves to prevent damage caused by chemical exposure, or other hazards will further boost the market growth in this region.

Asia-Pacific is expected to grow during the forecast period of 2021 to 2028 due to increasing use of protective gloves in the food & beverage, oil & gas, construction, healthcare, manufacturing and transportation industries. Moreover, development of manufacturing industries and healthcare sector in Asia Pacific countries such as India, Thailand, Indonesia, and China is highly responsible for the the growth of the protective gloves market.

The government imposed various rules and guidelines to prevent the spread of virus during the pandemic, which had a favorable impact on the global protective glove market. As a result of increased public awareness and government rules, carrying personal protective equipments (PPEs) kit became mandatory in all public venues, including airports, industrial regions, societies, hotels, public transportation, and other trip destinations,. Furthermore, manufacturers are increasing manufacturing rates and capacity to meet global demand for personal protective equipments (PPEs). For instance, In July 2020, the production of PPE kit on the daily basis will reach eight lakh. The global demand for protective gloves is expected to increase because governments continue raising awareness regarding hygiene and safety during pandemic period.