India Passenger Vehicle Interior Market is expected to grow at a healthy CAGR of 6.1% in the forecast period 2020 to 2027. The years considered for study are as mentioned below.

The major players dealing in India passenger vehicle interior market are introducing strong range of product portfolio. This has also helped the company to maximize the sales with enhanced product portfolio. For instance, in November 2018, Robert Bosch LLC. launched the new curved instrument cluster debuted in Volkswagen Touareg. It is a digital cockpit which contains curved instrument cluster which provides the reliability to the company. The cluster provides the option for the driver to select required features. Through this new product launch the company has strengthened their product portfolio and offering for market.

The company has wide global presence across the globe such as North America, Europe, Africa & Asia. In addition to it, the company also generates its revenue from the various subsidiary companies such as International Automotive Components Group GmbH (Germany), International Automotive Components Group North America Inc (U.S.).

Varroc Group, headquartered in Aurangabad, India was founded in 1990. The products offered by the company are Polymer, Electrical-Electronics, Metallic, Varroc Lighting Systems.

Faurecia is headquartered in Nanterre, France and it was founded in 1914. The company offers innovative automotive solutions for vehicles such as interiors, clean mobility, electronics and seating. 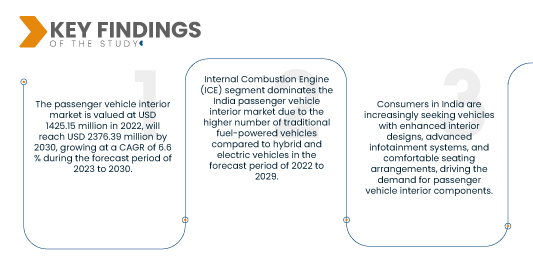