North America Self-Organizing Network (SON) Market is expected to grow with the CAGR of 14.7% in the forecast period of 2020 to 2027. The years considered for study are as mentioned below.

The major players dealing in North America self-organizing network (SON) market are introducing strong range of product portfolio. This helped companies to maximize the sales with enhanced product portfolio. For instance, in August 2015, Telefonaltiebolaget LM Ericsson joined hands with Cisco and NETSCOUT for licensing its OSS interfaces. This OSS interface was integrated with NETSCOUT’S Tektronix Communications Products and Cisco Self-Organizing Network (SON) products. This collaboration will help in providing flexibility to its customers. 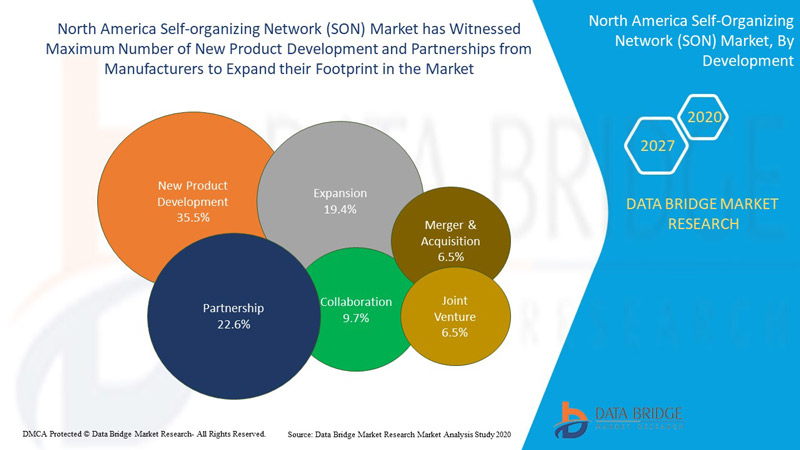 Nokia is headquartered in Espoo, Finland and was founded in year 1865. The company focuses on providing technology and devices for the networking needs of communications service providers. The company operates in business segments such as networks, nokia softwares and nokia technologies and networks is the market focused segment. The company offers wide range of product categories for business and for consumers among which for business is the market focussed category.

The company has wide presence in North America presence along with its various subsidiaries such as Alcatel-Lucent (France), Nokia Networks (Finland), Bell Labs (U.S), Smartphone (Norway), Scalado (Sweden) and among others.

Cisco Systems Inc. is headquartered in California, U.S. and was founded in 1984. The company focuses in providing wide range of technologies for helping customers to manage more devices and users connecting to networks. Company operates in networking, software, internet of things, mobility & wireless, security, data center, cloud out of which mobility and wireless is market focused segment.

The company has wide presence across North America and generates revenue from subsidiaries such as Cisco Webex (U.S.), Cisco Meraki (U.S.), OpenDNS (U.S.), App Dynamics (U.S.), among others.

Qualcomm Technologies Inc. is headquartered in California, U.S. and was founded in 1985. The company focuses in providing technologies and products for wireless industry such as consumer electronic devices, network equipment, and broadband network equipment. The company deals in the business segments such as QCT, QTL, QSI among which QCT is the market focussed segment. Company offers product categories such as by type, by application and by technology out of which by application is the market focused category.

The company has presence across the globe in North America. In addition to it, the company also generates its revenue from the various subsidiary companies such as Qualcomm Atheros (U.S.), SiRF (U.S.), Wilocity (U.S.), SnapTrack (U.S.), Airgo Networks (U.S.) and among others.