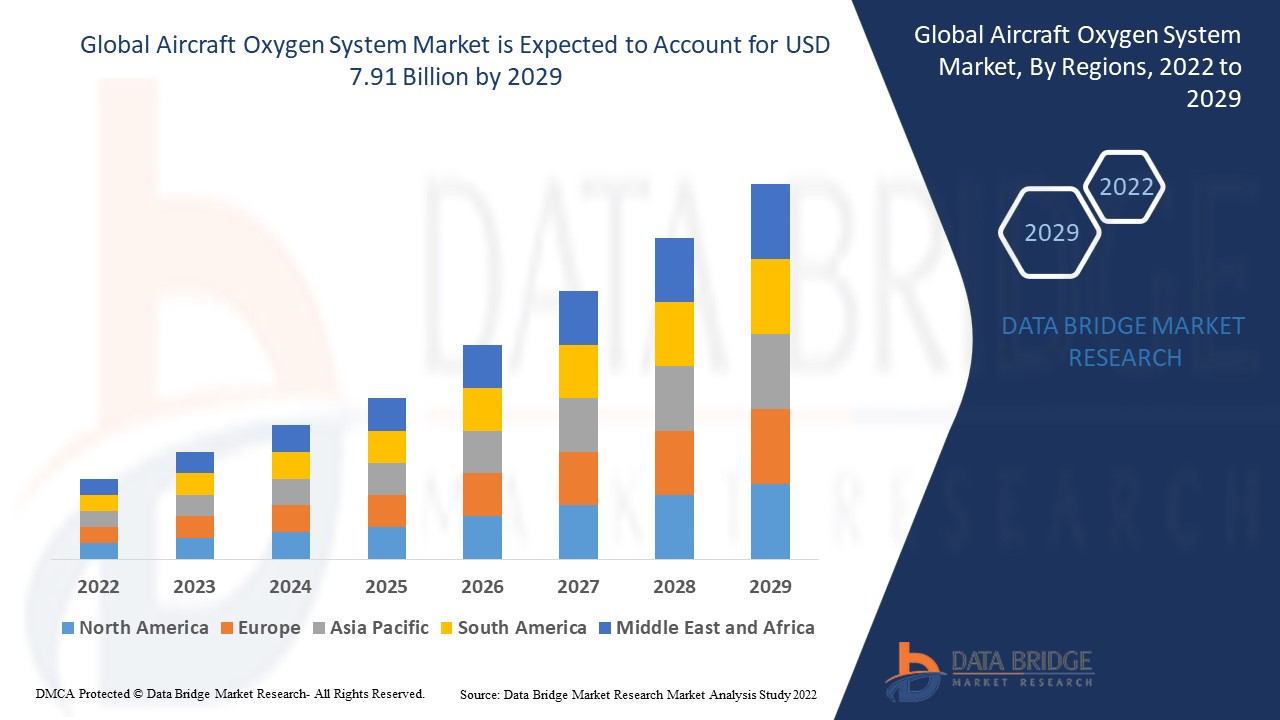 When flying at high altitudes, there isn't enough oxygen for a human to breathe adequately and survive, so aeroplane oxygen systems are used to regulate proper breathing for passengers on board. Furthermore, the industry has benefited from the strict enforcement of supplementary oxygen supply restrictions and the increased demand for carry-on portable oxygen.

Data Bridge Market Research analyses that the aircraft oxygen system market was valued at USD 4.63 billion in 2021 and is expected to reach the value of USD 7.91 billion by 2029, at a CAGR of 6.92% during the forecast period of 2022-2029. In addition to the market insights such as market value, growth rate, market segments, geographical coverage, market players, and market scenario, the market report curated by the Data Bridge Market Research team includes in-depth expert analysis, import/export analysis, pricing analysis, production consumption analysis, and pestle analysis.

The term "aircraft oxygen systems" refers to the systems that provide oxygen to all passengers and cabin crew on an aeroplane while it is in flight. As planes occasionally fly through low-pressure zones, the air inside the plane becomes unfit for breathing, so these oxygen systems are installed to replace it. These are typically stored in oxygen cylinders as compressed gas, but in some aircraft, they are also stored in liquid form. It not only maintains surface-level atmospheric conditions but also helps to control temperature and humidity levels.

A number of aircraft systems serve diverse purposes in various types of aircraft and play a major part in civil aviation oxygen delivery. The civil aviation industry's tight enforcement of emergency or supplemental oxygen distribution regulations has been essential to the market for aircraft oxygen systems' growth prospects. The development of oxygen storage systems is a key factor in the market's expansion. The focus is on losing weight while keeping the end goal in mind. Portable oxygen for small planes is becoming increasingly popular. Extremely light cylinders are a critical driver of the industry.

The industry has benefited from advancements in approved testing modules to ensure that aviation oxygen systems meet safety standards. The increasing use of hydrostatic testing on oxygen cylinders is one example. The aviation industry plans to implement highly serviceable oxygen systems. The growing demand for continuous-flow systems creates new opportunities for equipment manufacturers. In most aircraft, oxygen is stored in one or more oxygen cylinders as a pressurised gas. In an emergency, oxygen cylinders are typically stored for the flight deck's occupants to use.

However, strict safety regulations and supplier production capacity limitations are among the major factors limiting market growth and further challenging the aircraft oxygen system market during the forecast period.

Due to the COVID-19 outbreak, numerous industries have temporarily ceased operations or are operating with a reduced workforce due to enforced lockdowns and restrictions imposed by respective governing bodies. The global military aircraft oxygen system market is no exception, and this factor is expected to significantly negatively impact the industry's revenue growth. Furthermore, the high costs associated with installing and maintaining these machines may impede the revenue growth of the global military aircraft oxygen system market during the forecast period.

The aircraft oxygen system market is segmented on the basis of aircraft type, system, component, mechanism, sales channel and application. The growth amongst these segments will help you analyse meagre growth segments in the industries and provide the users with a valuable market overview and market insights to help them make strategic decisions for identifying core market applications.

The aircraft oxygen system market is analysed and market size insights and trends are provided by country of aircraft type, system, component, mechanism, sales channel and application as referenced above.

The country section of the report also provides individual market impacting factors and changes in market regulation that impact the current and future trends of the market. Data points like down-stream and upstream value chain analysis, technical trends and porter's five forces analysis, case studies are some of the pointers used to forecast the market scenario for individual countries. Also, the presence and availability of Global brands and their challenges faced due to large or scarce competition from local and domestic brands, impact of domestic tariffs and trade routes are considered while providing forecast analysis of the country data.

Some of the major players operating in the aircraft oxygen system market are:

What is the future value of the Market?

What is the growth rate of the market?

What are the major countries covered in the Market?