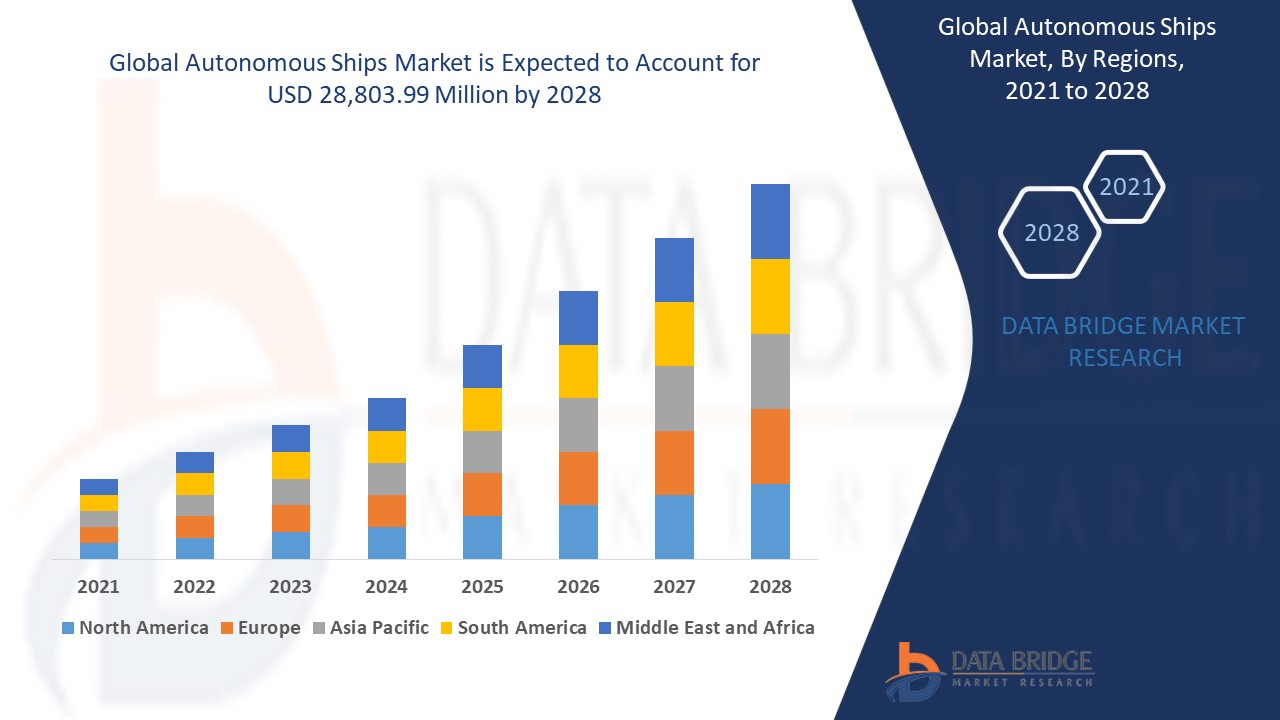 Autonomous ships refer to the ships that are remote built ships where operations are performed by remote control mechanism. These operations are operated by the humans located at the shore. Autonomous requires high quality systems and reliable communication system which work with the assistance of connectivity, control algorism and sensor technology. RADAR technology is used by the control system used for autonomous ships.

The rise in the investment in the autonomous projects acts as one of the major factors driving the growth of autonomous ships market. The increase in the development of next-generation autonomous vessels and the rise in the adoption of these systems in the vessels for the purpose of operating automate several processes such as navigation and propulsion of the vessel with the use of components and systems including sensors and automated navigation systems and propulsion control systems accelerate the market growth. The rise in the development of software, use of automated systems to reduce human errors and risks and the increase in demand for situational awareness in vessels, further influence the market. Additionally, surge in budgets of shipping companies for the incorporation of ICT in vessels, urbanization and digitization and development of next-generation of autonomous vessels positively affect the autonomous ships market. Furthermore, advancement in sensor technologies for improved navigation systems in autonomous ships and innovations in propulsion systems for autonomous ships extend profitable opportunities to the market players in the forecast period of 2021 to 2028.

On the other hand, Cost-intensive customization of marine automation systems and lack of common standards for data generated from different subsystems in a ship are expected to obstruct the market growth. Concerns regarding vulnerability associated with cyber threats and lack of skilled personnel to handle and operate marine automation systems are projected to challenge the autonomous ships market in the forecast period of 2021-2028.

The autonomous ships market is segmented on the basis of ship type, autonomy, solution, propulsion type, fuel type and end use. The growth among segments helps you analyze niche pockets of growth and strategies to approach the market and determine your core application areas and the difference in your target markets.

The autonomous ships market is analyzed and market size, volume information is provided by country, ship type, autonomy, solution, propulsion type, fuel type and end use as referenced above.

Data Bridge Market Research is a leader in consulting and advanced formative research. We take pride in servicing our existing and new customers with data and analysis that match and suits their goal. The report can be customized to include production cost analysis, trade route analysis, price trend analysis of target brands understanding the market for additional countries (ask for the list of countries), import export and grey area results data, literature review, consumer analysis and product base analysis. Market analysis of target competitors can be analyzed from technology-based analysis to market portfolio strategies. We can add as many competitors that you require data about in the format and data style you are looking for. Our team of analysts can also provide you data in crude raw excel files pivot tables (Fact book) or can assist you in creating presentations from the data sets available in the report.

The Global Autonomous Ships Market is Projected to Grow at A CAGR of 9.20% During the Forecast Period of 2021-2028