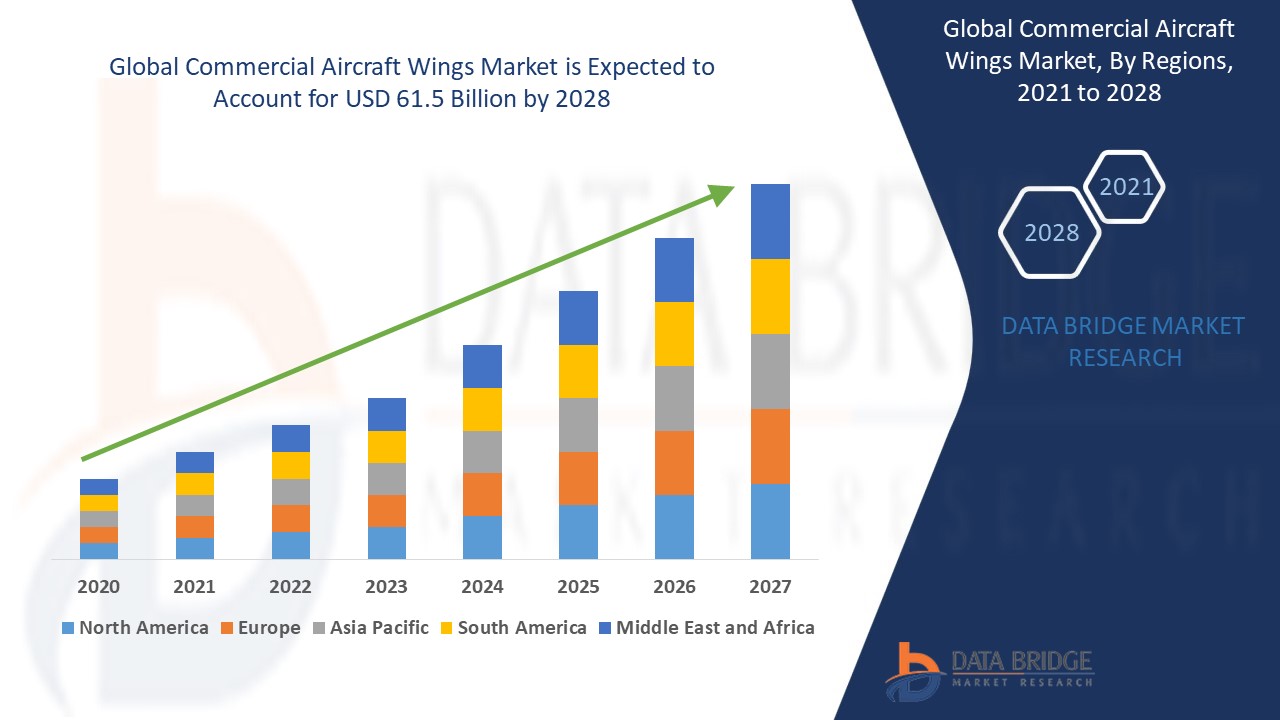 Commercial aircraft wings market size is valued at USD 61.5 billion by 2028 and is expected to grow at a compound annual growth rate of 7.34% over the forecast period of 2021 to 2028. Data Bridge Market Research report on commercial aircraft wings market provides analysis and insights regarding the various factors expected to be prevalent throughout the forecasted period while providing their impacts on the market’s growth.

Aircraft wings help to generate the upward aerodynamic force or lift, which is caused by the aircraft's forward airspeed, and depends on shape of the wings. The shape of wings are depended on the airfoil shape that is designed to make lift of vertical motion so as to respond to the weight of an aircraft.

In addition, the rising focus on research and development sector to develop a wide range of innovations in the technology will further offer various growth opportunities for the commercial aircraft wings market in the forecast period of 2021 to 2028.

Commercial aircraft wings market is segmented on the basis of type, type of wing, shape of wing, ratio and application. The growth among segments helps you analyze niche pockets of growth and strategies to approach the market and determine your core application areas and the difference in your target markets.

Commercial aircraft wings market is analyzed and market size, volume information is provided by country, type, type of wing, shape of wing, ratio and application as referenced above.

Asia-Pacific leads the commercial aircraft wings because of the increasing demand for energy efficient planes in this particular region. Japan and China are amongst the major countries contributing in the market of commercial aircraft wing owing to rapidly increasing air travelers.  Europe is expected to expand at a significant growth rate over the forecast period of 2021 to 2028 owing to the increasing global tourism associated with rapid increase in demand for aircraft in the region.

The country section of the commercial aircraft wings market report also provides individual market impacting factors and changes in regulation in the market domestically that impacts the current and future trends of the market. Data points like down-stream and upstream value chain analysis, technical trends and porter's five forces analysis, case studies are some of the pointers used to forecast the market scenario for individual countries. Also, the presence and availability of global brands and their challenges faced due to large or scarce competition from local and domestic brands, impact of domestic tariffs and trade routes are considered while providing forecast analysis of the country data.