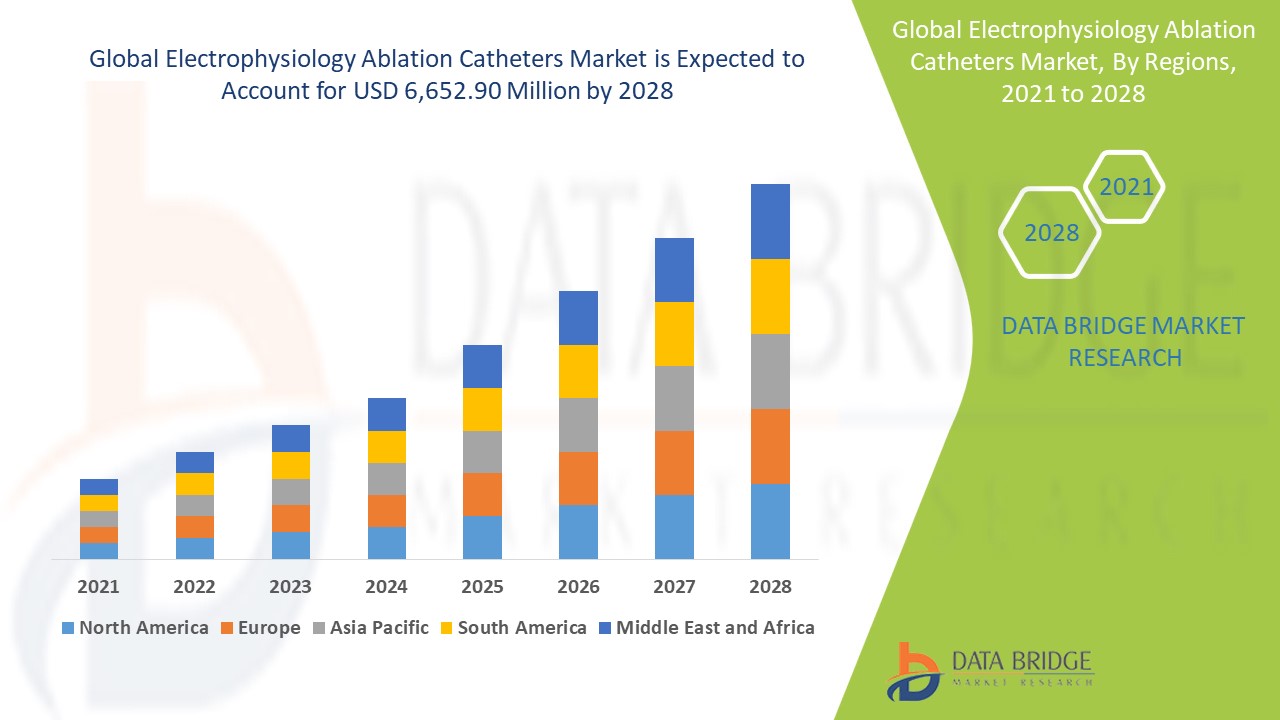 Electrophysiology ablation catheters market is expected to gain market growth in the forecast period of 2021 to 2028. Data Bridge Market Research analyses the market to reach at an estimated value of USD 6,652.90 million by 2028 and grow at a CAGR of 7.41% in the above-mentioned forecast period. Increase in the enhancement in healthcare infrastructure drives the electrophysiology ablation catheters market.

However, high cost of electrophysiology products and inadequate reimbursement, rise in the unfavourable healthcare reforms in the US and increase in the dearth of awareness and skilled professionals are the major factors among others which will obstruct the market growth, and will further challenge the growth of electrophysiology ablation catheters market in the forecast period mentioned above.

Electrophysiology ablation catheters market is segmented on the basis of indication and end-use. The growth amongst these segments will help you analyse meagre growth segments in the industries, and provide the users with valuable market overview and market insights to help them in making strategic decisions for identification of core market applications.

Electrophysiology ablation catheters market is analysed and market size insights and trends are provided by country, indication and end-use as referenced above.

The country section of the electrophysiology ablation catheters market report also provides individual market impacting factors and changes in regulation in the market domestically that impacts the current and future trends of the market. Data points such as consumption volumes, production sites and volumes, import export analysis, price trend analysis, cost of raw materials, down-stream and upstream value chain analysis are some of the major pointers used to forecast the market scenario for individual countries. Also, presence and availability of global brands and their challenges faced due to large or scarce competition from local and domestic brands, impact of domestic tariffs and trade routes are considered while providing forecast analysis of the country data.

Data Bridge Market Research is a leader in advanced formative research. We take pride in servicing our existing and new customers with data and analysis that match and suits their goal. The report can be customised to include price trend analysis of target brands understanding the market for additional countries (ask for the list of countries), clinical trial results data, literature review, refurbished market and product base analysis. Market analysis of target competitors can be analysed from technology-based analysis to market portfolio strategies. We can add as many competitors that you require data about in the format and data style you are looking for. Our team of analysts can also provide you data in crude raw excel files pivot tables (Fact book) or can assist you in creating presentations from the data sets available in the report.