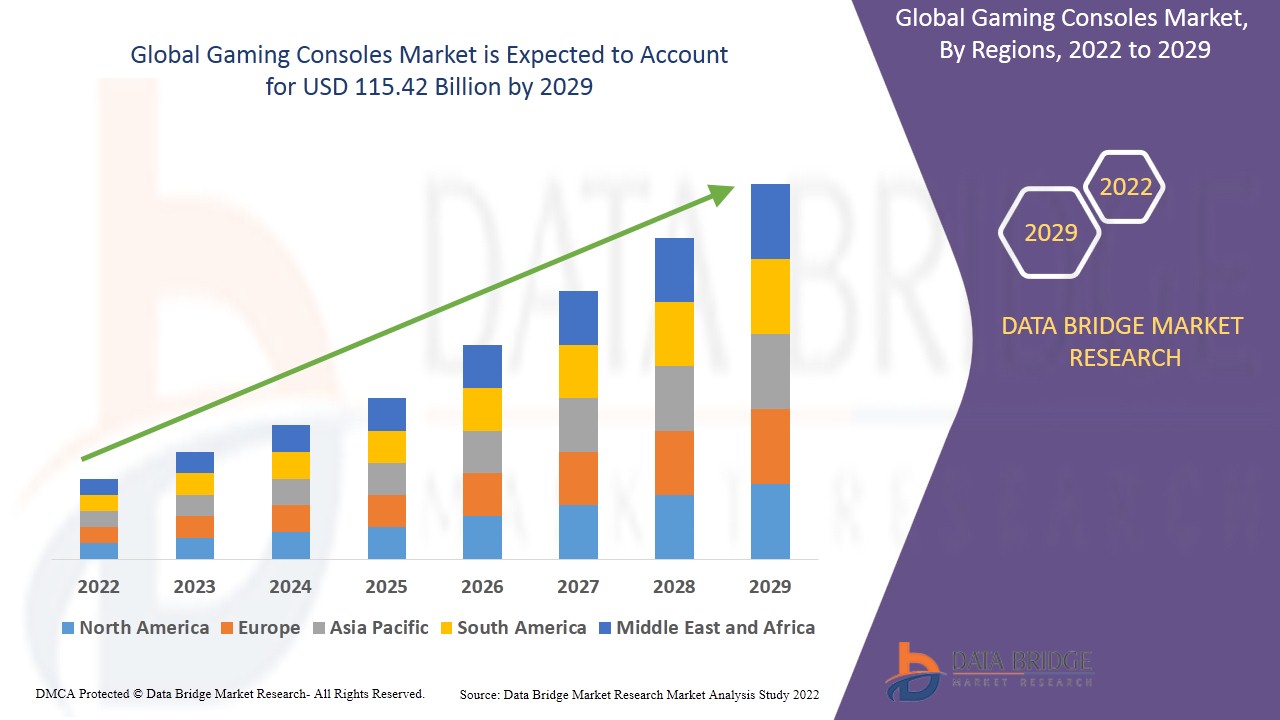 Over the last few years, there has been immense growth in the participation in gaming activities. Due to the development of breakthrough audio-visual technology, the global industry is rapidly expanding. The gaming business is releasing sturdy gaming consoles and peripherals as a result of technology developments and innovation in various audio-visual technologies. HDTVs with HDMI connectors and built-in Wi-Fi connectivity, as well as the ability to handle external hard drives, provide a better gaming experience. The various developments and innovations during forecasted period will largely help market to gain immense growth and expansion.

Gaming consoles are electronic computer devices/machines that output video to a display system so that one or more people can play the games that are available on these machines. The word is commonly used to describe the computers' primary function, despite the fact that they are now much more than just game consoles, but rather entertainment consoles. These machines are much smaller than their traditional equivalents, such as arcade games, and give a far better playing experience for the gamers.

This section deals with understanding the market drivers, advantages, opportunities, restraints and challenges. All of this is discussed in detail as below:

One of the primary elements fueling the market's growth is the additional perks and features connected with the consoles, such as being an entertainment console rather than just a gaming console. The various advantages provided by multi-functional consoles, such as the ability for gamers to simultaneously download videos, surf the internet, listen to music, and view videos while playing games is projected to create outstanding demand for the gaming consoles services during the forecasted period.

The increase in spending by gamers will further propel the growth rate of gaming consoles market. Additionally, the increasing consumer preference for home consoles over handheld gaming consoles along with the rapid urbanization will also drive market value growth over forecasted timeframe. Furthermore, the increase in adoption of Bluetooth, Wi-Fi and others across different sectors also boosts the overall market’s growth.

Furthermore, the technological advancements and developments of innovative product offerings coupled with the advancement in wireless connectivity extend profitable opportunities to the market players in the forecast period of 2022 to 2029. Additionally, the innovative marketing strategies adopted by professionals and developers to promote the 3D video games along with the growing investment in gaming industry and increasing “MMOGs (massively multiplayer online gaming options)” will further expand the future growth of the gaming consoles market.

However, high levels of cost associated with the devices available in the market along with the high cost of individual gaming titles required to operate these consoles is anticipated to hamper the overall growth. This factor will create hindrances for the growth of the gaming consoles market.

Development of gaming consoles necessitates highly qualified developers and testers, as well as infrastructure. The lack of technological skills within the workforce has resulted in a labour shortage for gaming consoles. The global market's lack of skilled and experienced people is the primary stumbling block to its expansion. Therefore, this factor is anticipated to challenge the gaming consoles market growth rate.

The recent outbreak of coronavirus had a huge impact on the gaming consoles market. Many governments around the world have implemented lockdown restrictions and travel restrictions as a result of the pandemic, disrupting the supply chain for goods and resources as well as market demand. The pandemic has produced problems with the consoles' manufacturing process. Because China is the primary source of electronics and other hardware components, travel and transportation concerns to and from China and other parts of the region have mostly impacted the manufacturing process. Many video game producers and operators have attempted to keep their operations stable. In comparison to other businesses, the work-from-home concept has generated a record for online games during the pandemic, resulting in a more robust solution for the gaming console market.

The gaming consoles market is segmented on the basis of component, console type, platform, technology, age group, gamer, application, device, distribution channel and application. The growth amongst these segments will help you analyze meagre growth segments in the industries and provide the users with a valuable market overview and market insights to help them make strategic decisions for identifying core market applications.

On the basis of component, the gaming consoles market has been segmented into hardware and software.

On the basis of platform, the gaming consoles market is segmented into playstation, xbox, wii and others.

On the basis of technology, the gaming consoles market is segmented into virtual and augmented reality, motion jump technology, polarized shutter technology, automatic stereoscopy, xbox illumiroom and others.

On the basis of age group, the gaming consoles market is segmented into 0-22 years, 23-32 years and above 33 years.

On the basis of gamer, the gaming consoles market is segmented into hard-core gamer and casual gamer.

On the basis of application, the gaming consoles market is segmented into shooter, action, sport games, role-playing, adventure, racing, fighting and strategy.

On the basis of device, the gaming consoles market is segmented into tv, computer/pc and system consoles.

On the basis of end use, the gaming consoles market is segmented into household usage and commercial usage.

North America dominates the gaming consoles market because of the surging demand for gaming consoles based on advanced technologies such as AR/VR platform, Bluetooth, cloud services, 3D technology and others within the region.

Asia-Pacific on the other hand, is estimated to show lucrative growth during the forecast period of 2022 to 2029 due to the easy availability of 3D gaming hardware and software in the region.

The country section of the report also provides individual market impacting factors and changes in market regulation that impact the current and future trends of the market. Data points like down-stream and upstream value chain analysis, technical trends and porter's five forces analysis, case studies are some of the pointers used to forecast the market scenario for individual countries. Also, the presence and availability of global brands and their challenges faced due to large or scarce competition from local and domestic brands, impact of domestic tariffs and trade routes are considered while providing forecast analysis of the country data.

Data collection and base year analysis is done using data collection modules with large sample sizes. The stage includes the obtainment of market information or related data through various sources and strategies. It includes examining and planning all the data acquired from the past advance. It likewise envelops the examination of information inconsistencies seen across different information sources. The market data is analyzed and estimated using market statistical and coherent models. Also market share analysis and key trend analysis are the major success factors in the market report. To know more, please request an analyst call or drop down your inquiry.

What is the Future Market Value for Gaming Consoles Market?

What is the Growth Rate of the Gaming Consoles Market?

The Gaming Consoles Market is Estimated to Register a CAGR of 9.5% During the Forecast Period of 2022 to 2029.

What are the Major Companies Operating in the Gaming Consoles Market?

Which Countries Data is Covered in the Gaming Consoles Market?

What are the Main Data Pointers Covered in Gaming Consoles Market Report?