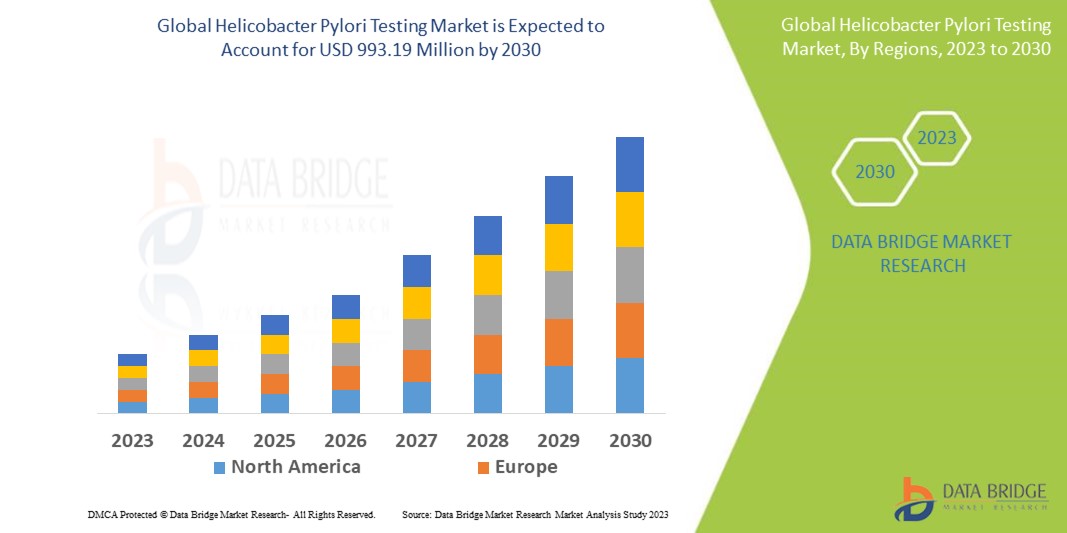 Helicobacter pylori testing market is expected to gain market growth in the forecast period of 2021 to 2028. Data Bridge Market Research analyses the market to account for USD 573.30 million, increasing in the above forecast timeframe at a CAGR of 7.40% by 2028. An increasing knowledge of the benefits of helicobacter pylori testing among patients would further build opportunities for market development.

Aerobic, gram-negative bacteria mainly detected in the stomach are Helicobacter pylori (H. pylori). In order to maintain the stomach ecosystem, it plays a crucial role. H. infection with pylori is caused by spiral-shaped bacteria that invade the oesophagus, small intestine and stomach lining, contributing to gastric cancer, peptic ulcers, and chronic gastritis.

Unavailability of skilled professionals along with lack of awareness regarding the benefits of testing in developing economies which will likely to act as market restraints factor for the growth of the helicobacter pylori testing in the above mentioned projected timeframe. Competitive pricing pressure will become the biggest and foremost challenge for the growth of the market.

Helicobacter pylori testing market is segmented on the basis of test type, method, and end user. The growth amongst these segments will help you analyse meagre growth segments in the industries, and provide the users with valuable market overview and market insights to help them in making strategic decisions for identification of core market applications.

Helicobacter pylori testing market is analysed and market size insights and trends are provided by country, test type, method, and end user as referenced above.

The U.S. dominates the North America helicobacter pylori testing market due to the increasing consciousness about testing options along with increasing number of technological advancement and prevalence of well-established healthcare infrastructure and geriatric population in the region, while Asia-Pacific is expected to grow at the highest growth rate in the forecast period of 2021 to 2028 due to the increasing number of development in the testing sectors in the region.

The country section of the helicobacter pylori testing market report also provides individual market impacting factors and changes in regulation in the market domestically that impacts the current and future trends of the market. Data points such as consumption volumes, production sites and volumes, import export analysis, price trend analysis, cost of raw materials, down-stream and upstream value chain analysis are some of the major pointers used to forecast the market scenario for individual countries. Also, presence and availability of global brands and their challenges faced due to large or scarce competition from local and domestic brands, impact of domestic tariffs and trade routes are considered while providing forecast analysis of the country data.

Data Bridge Market Research is a leader in advanced formative research. We take pride in servicing our existing and new customers with data and analysis that match and suits their goal. The report can be customised to include price trend analysis of target brands understanding the market for additional countries (ask for the list of countries), clinical trial results data, literature review, refurbished market and product base analysis. Market analysis of target competitors can be analysed from technology-based analysis to market portfolio strategies. We can add as many competitors that you require data about in the format and data style you are looking for. Our team of analysts can also provide you data in crude raw excel files pivot tables (Factbook) or can assist you in creating presentations from the data sets available in the report.

Global Helicobacter Pylori Testing Market is Expected to Reach A Value of USD 573.30 Million by 2028