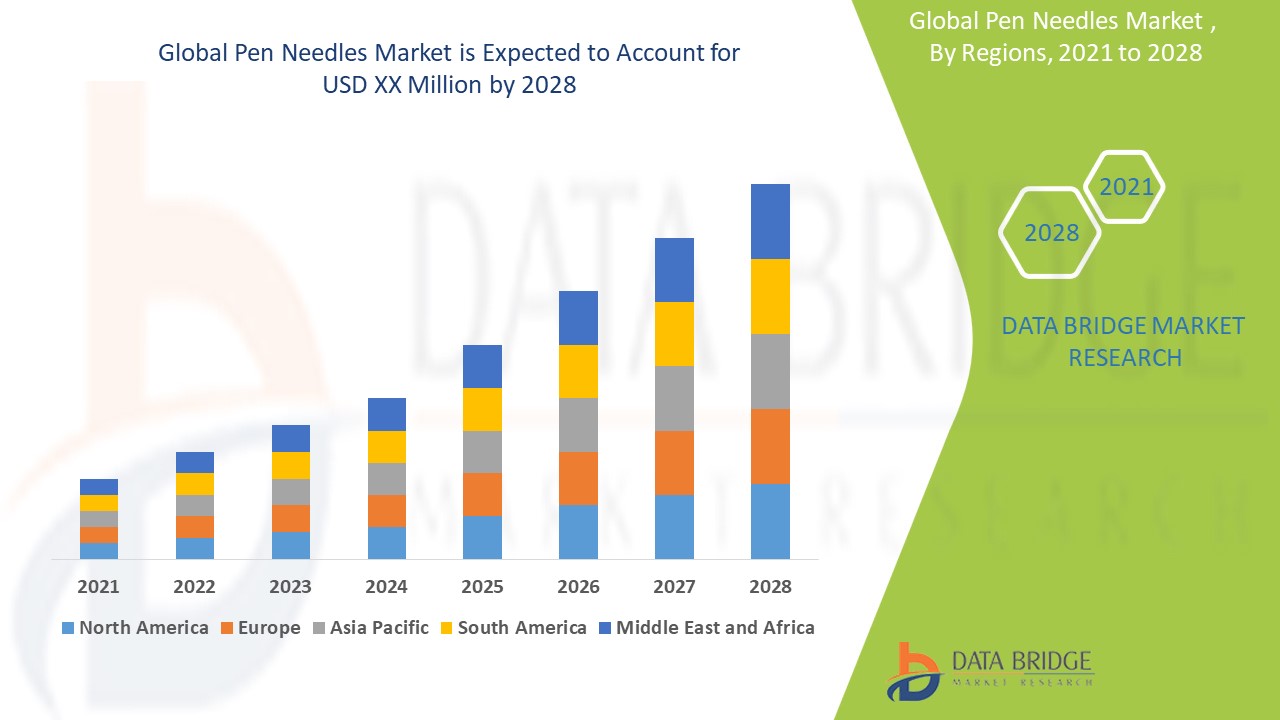 Data Bridge Market Research analyses that the pen needles will exhibit a CAGR of around 10.68% for the forecast period of 2021-2028. Increasing prevalence of chronic diseases across the world, continuous attempts being made to embrace the best vaccines, rising geriatric population, and increased expenditure for the development of healthcare infrastructure are the major factors attributable to the growth of pen needles market.

From the name itself, it is clear that pen needles are the pen injections that are used to deliver injectable medications into the body of a patient. Pen needles are comprised of hollow needles embedded in a plastic body and are available in a variety of needle lengths and diameters.

The pen needles market is segmented on the basis of type, length, usability, application, therapy, mode of purchase, and end user. The growth amongst these segments will help you analyse meagre growth segments in the industries, and provide the users with valuable market overview and market insights to help them in making strategic decisions for identification of core market applications.

The pen needles market is analysed, and market size insights and trends are provided by country, type, length, usability, application, therapy, mode of purchase, and end user as referenced above.

Europe dominates the market owing to the prevalence of advanced healthcare infrastructure and rising prevalence of the target disease. Asia-Pacific is projected to score highest growth rate and exhibit the highest CAGR for the forecast period. This is because of the rising expenditure to develop healthcare infrastructure, ever-rising diabetic population, and rising awareness about the availability treatment options.

The country section of the pen needles market report also provides individual market impacting factors and changes in regulation in the market domestically that impacts the current and future trends of the market. Data points such as consumption volumes, production sites and volumes, import export analysis, price trend analysis, cost of raw materials, down-stream and upstream value chain analysis are some of the major pointers used to forecast the market scenario for individual countries. Also, presence and availability of global brands and their challenges faced due to large or scarce competition from local and domestic brands, impact of domestic tariffs, and trade routes are considered while providing forecast analysis of the country data.

Pen needles market also provides you with detailed market analysis for patient analysis, prognosis, and cures. Prevalence, incidence, mortality, adherence rates are some of the data variables that are available in the report. Direct or indirect impact analysis of epidemiology to market growth are analysed to create a more robust and cohort multivariate statistical model for forecasting the market in the growth period.

At what growth rate will the market be projected to grow during the forecast period of 2021 to 2028?

The Pen Needles Market is projected to grow at a CAGR of 10.68% during the forecast period by 2028.

Which market segments are covered in this report?

The Pen Needles Market is segmented on the basis of product type, length, usability, application, therapy, mode of purchase, and end user.

Which countries data are covered in the report?