The Use of Palliative Radiotherapy in the Treatment of Lung Cancer

Lung cancer occurs mainly in older people. Most people diagnosed with lung cancer are over the age of 65. The number of people diagnosed is very small and under the age of 45. The average age at diagnosis is about 70 years. Lung cancer is the leading cause of cancer death, accounting for approximately 25% of all cancer deaths. Lung cancer kills more people each year than colon, breast and prostate cancer combined. On a positive note, the number of new lung cancer cases continues to decline, partly because people are quitting smoking. Overall, a man has about a 1 in 15 chance of developing lung cancer in his lifetime. For women, the risk is her 1 in 17. These figures include both smokers and nonsmokers. Smokers are at higher risk, non-smokers are at lower risk. 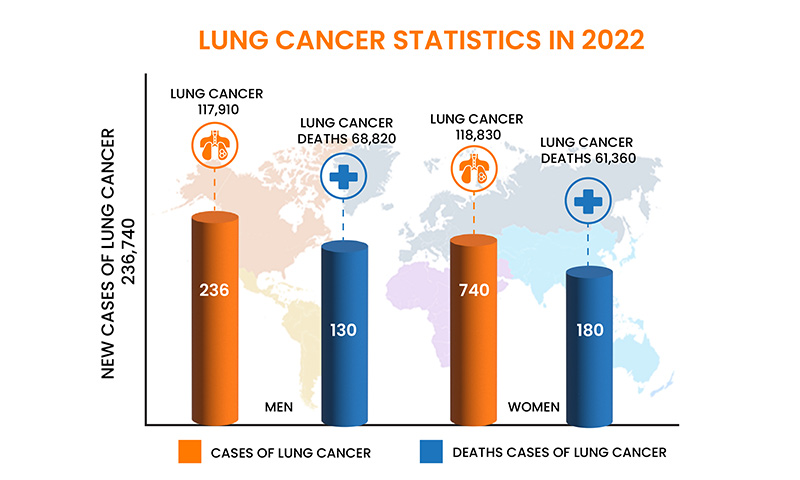 Radiation therapy can safely, inexpensively and effectively relieve many symptoms of advanced cancer with minimal side effects. Radiation therapy can be used to treat pain associated with bone metastases and growing visceral metastases or primary cancers, neurological symptoms associated with brain and spine metastases, other symptoms such as coughing and shortness of breath in advanced lung cancer, and various internal and external tumors. Palliative radiotherapy should be administered within a multidisciplinary oncology team that includes a medical oncologist, a palliative care physician, and various surgical and interventional specialists. Radiotherapy regimens must balance the convenience and reduced side effects associated with short courses of fractionated radiotherapy with the potential durability associated with long courses of radiotherapy in patients with long life expectancy. The judicious use of advanced radio therapeutic techniques such as intensity-modulated radiotherapy and stereotactic radiotherapy (SRT) may be justified in selected patients and may improve symptom control and persistence but with increased technical and economic costs.

Palliative radiotherapy has been the cornerstone of symptom management for patients with advanced and metastatic cancer for over 100 years. Shortly after his discovery of X-rays in 1896, clinicians have used radiation therapy to help patients manage the troublesome symptoms of advanced cancer, such as pain and bleeding. The advent of megavolt radiation in the 1950s and 1960s dramatically improved its ability to relieve symptoms of advanced cancers deeper than the skin and bones, and the deeper penetration of radiotherapy, previously associated with kilovolt radiation. There are neurological symptoms of brain metastases and obstructive symptoms of visceral tumors. The integration of palliative radiotherapy into hospice and palliative care teams is not always conscious, indicating that only 10% of his hospice providers consider radiation oncologists to be part of the palliative care team. It has been. This is according to the SEER-Medicare population study of over 50,000 patients diagnosed with metastatic lung, prostate, breast, and colon cancers, and found that up to 40% of patients received some form of radiation therapy during treatment.

Palliative radiation therapy is an effective treatment whenever a local tumor is causing symptoms in a patient. As with any treatment for advanced cancer, the treatment chosen must balance the potential efficacy of the treatment against the burden on the patient and family. Inevitably, discussions of palliative radiotherapy with patients and families include discussion of alternative palliative approaches. Many of them are detailed in this issue of Annals of Palliative Medicine (APM). In addition to considering alternatives to palliative radiation therapy, the radiation oncologist must also determine the most appropriate dose-fractionation scheme for each patient and clinical scenario. Many studies have shown that short-term radiation therapy is equivalent to long-term radiation therapy in terms of immediate symptom relief. However, there is a potential trade-off between these low-fractionated cycles with short total treatment times and high doses per fraction and long cycles with low doses per fraction and long treatment times.

In basic radiobiology, the higher the total radiotherapy dose, the greater the chance of eradicating the tumor. In addition, higher doses per fraction (hypofractionation) are more likely to cause long-term radiation side effects. With continued advances in systemic therapy and consequent improvements in patient survival, it is becoming increasingly important to consider these short- and long-term treatment side effects. Predicting survival is critical for determining the optimal radiation dose fractionation scheme, but despite multiple prognostic models for the different scenarios encountered in palliative radiotherapy, this remains a major challenge. The remainder of this section discusses dose fractionation issues and side effects of palliative radiotherapy in bone, brain, and visceral metastases, and other indications of palliative radiotherapy.

Some indication of palliative radiotherapy include:

Pain due to Bone Metastases

Many studies have detected bone metastases in up to 70% of patients with advanced cancer. Such metastases often cause localised pain and account for 35-40% of all palliative radiotherapy treatments. This pain may limit the day-to-day activities of a person. Pain may be constant or intermittent, can be neuropathic with a radiating dermatomal component and possible altered sensation. The initial management involves analgesics and a holistic assessment of needs with interventions as required, such as home adaptations and walking aids. If, despite weak opioids, patients have persistent pain or side effects of medication, we need to consider referral for radiotherapy. Metastases in long bones have higher risk of pathological fracture. When this risk is assessed to be high, surgical stabilization is often carried out before radiotherapy.

It has been witnessed that lung cancer is the third commonest cancer in the U.K. and 28% of patients will present with locally advanced disease. Thoracic symptoms include cough (40%), dyspnoea (50%), chest pain (28%), haemoptysis (10%), and dysphagia (7%).

Palliative radiotherapy improved obstructive dysphagia from locally advanced oesophageal cancer in about two-thirds of patients after a median of four weeks in a non-randomised phase I/II study. Given this delay in improvement and the risk of deterioration because of acute oesophagitis, patients with clinically significant dysphagia at baseline often undergo oesophageal stenting before radiotherapy. Radiotherapy improves durability of swallowing function after stenting. Though, for patients with very limited prognosis, stenting alone can provide rapid relief of dysphagia, and this group is unlikely to benefit from the addition of palliative radiotherapy. Symptomatic radiation pneumonitis (occurring in <5%) can occur from six weeks to six months after treatment that includes the lungs.

Snapshot of the Radiotherapy Procedure:

Conventional radiotherapy with dimensional (2D) making plans makes use of easy beam arrangements, regularly with hostile anterior and posterior fields, to deal with tumors. This remedy method is brief to installation and has low fees of aspect outcomes for regions handled with quick route schemes which includes eight Gy in an unmarried fraction. However, treating with open fields exposes large quantities of tissue, inclusive of everyday tissues, to excessive doses of radiotherapy. Three dimensional (3D) making plans with CT simulation lets in extra complicated beam arrangements, growing the conformity of the excessive dose radiation vicinity even as doubtlessly spreading out the regions of low dose radiation in a try and lessen remedy toxicity. A similarly step in radiotherapy complexity makes use of modulation of radiotherapy beams (intensity-modulated radiation therapy, termed IMRT) or arc radiotherapy, permitting even better conformity of excessive dose regions, inclusive of abnormal shapes to keep away from everyday structures. SRT may be brought to the frame (termed stereotactic frame radiotherapy or stereotactic ablative radiotherapy) or the brain (termed stereotactic radiosurgery) with extra in depth immobilization of the patient (the usage of a body or complete frame mold).

This radiotherapy can be applied to deal with excessive dose radiation with fast dose fall-off, probably permitting excessive doses of radiotherapy to be introduced with minimum radiation doses to surrounding ordinary systems. This can result in better organic powerful doses of irradiation, and for that reason upgrades in tumor manage, in addition to fewer aspect results to systems outdoor of the excessive dose region. Proton remedy is an opportunity shape of radiotherapy that makes use of charged particles (protons) to permit the bulk of the dose to be introduced on the Bragg peak, without go out dose past this point. While the technical information of every form of remedy is past the scope of this manuscript, the capability for multiplied dose conformity of every of those superior strategies or remedy sorts gives capability dosimetric benefits over traditional 2D or three-D radiotherapy for sufferers referred for palliative radiotherapy: namely, with superior technologies, excessive doses of irradiation can be introduced to the goal quantity with extra restricted doses to surrounding ordinary systems, permitting neighborhood tumor manage and symptomatic alleviation with minimum aspect results.

How to Implement a Palliative Radiotherapy Program?

Associated Side Effects of Palliative Radiotherapy

The various side effects of radiotherapy are dictated by which tissues receive a substantial dose. For instance, conventional radiotherapy to lumbar spine vertebral metastases will typically involve irradiation of the bowels, resulting in side effects associated with both the bone metastasis and bowels. Moreover, treatment is associated with fatigue in at least two thirds of patients, and this can affect the quality of life, limiting participation in preferred activities.

Acute side effects of palliative radiotherapy generally resolve within 4-6 weeks of completing the treatment. In routine practice, palliative prescribing of analgesia and antiemetics supports the management of side effects.

Patient Perspective of a Case of Palliative Radiotherapy:

A 60-year-old man was suffering from myeloma. He received palliative radiotherapy multiple times during his treatment for multiple myeloma. In the early course of his treatment, radiotherapy for back pain and spinal cord compression ensured that he was able to continue the gardening he had always enjoyed. Receiving treatment was never uncomfortable for him, but, as his general condition deteriorated towards the end of his life, he spent more time in hospital and the advantages of radiotherapy became less evident. He had a mask made for one of his treatments which covered his head and neck: he didn’t find this particularly uncomfortable and he was excited to show it to everyone. He even let his grandchildren play with it once treatment was completed.

Another potential role for these therapies is in more advanced disease, where high-dose radiotherapy for symptomatic metastases is treated in minimal fractions with minimal toxicity to surrounding tissue. Can provide better and sustained symptom management while continuing Another area of ​​palliative radiotherapy currently experiencing significant progress is the use of radionuclides. These treatments include anatomically targeted delivery (e.g., via the hepatic artery of metastatic colon cancer) or the use of radiolabeled molecules or monoclonal antibodies that are preferentially taken up by the tumor or its microenvironment. Either will deliver the radioisotope to the tumor tissue. Historically, their use was limited to a few relatively rare tumors, but newer agents are increasingly showing benefits in many more common diseases, such as metastatic prostate cancer. Ongoing international research may lead to more widespread use of these treatments in the years to come.

Palliative radiotherapy remains a primary component of multimodality treatment of patients with lung cancer in the modern era. There are many studies that showed its use to treat symptomatic thoracic disease, bony disease and brain metastasis. Further studies are needed to keep pace with the changing landscape of systemic therapy in lung cancer to best understand how to incorporate. Palliative radiotherapy offers effective symptom control for focal disease because of cancer. Increased analgesia, anti-emetics, and in some cases corticosteroids aided to reduce discomfort and side effects. Acute side effects of radiotherapy generally resolve within 4-6 weeks of completing treatment. Several symptoms of cancer may decline before improvement. For patients in the final weeks of life, the side effects and disruption of palliative radiotherapy may overshadow the benefits, and holistic palliative care may be more suitable for patients.