Europe Drinking Chocolate Market is expected to grow at a CAGR of 3.6% in the forecast period 2020 to 2027. The years considered for study are as mentioned below.

Europe drinking chocolate market is a highly consolidated market, which includes specific number of key players as well as local players. The market has witnessed increased various strategic developments in expanding their production facility for manufacturing of different drinking chocolate products, various acquisitions and partnership to enter in specific market have led the manufacturers to established their foot prints.

For instance, in March 2020, Nestlé launched its plant-based product Milo in Australia. Milo replaced the milk powder with oats and soy. Launching the new product has helped to increase its customer base in the market and increased market thereby increased revenue in future. 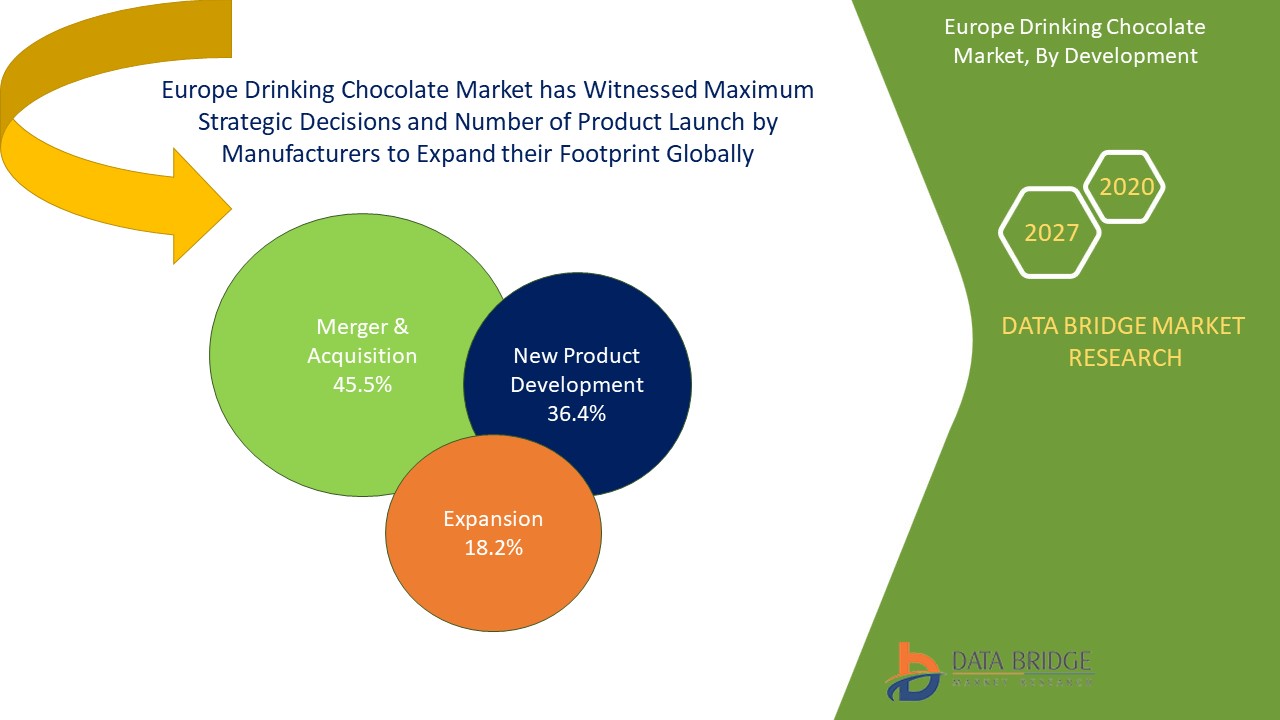 Nestlé headquartered in Switzerland and founded in 1866. The company focuses on offering products and services for all stages of life via their food and beverage company. The company is launching and taking strategic decisions for enhancing product portfolio. The company deals in many business segment such as powdered & liquid beverages, milk products and ice cream, prepared dishes and cooking aids, confectionery, petcare, nutrition and health science and water from which the focused business segment is Powdered & Liquid Beverages. The company deals in various product categories such as baby foods, bottled water, cereals, chocolate & confectionery, coffee, culinary, chilled & frozen food, dairy, drinks, dairy, food service, healthcare nutrition, ice cream, petcare and recipes in which drinks product category is focused category for the drinking chocolate market. For instance

The company has wide global presence across the globe such as North America, Asia-Pacific, Middle East & Africa, South America and Europe. The company provides its products in market through its subsidiaries such as Nespresso (Switzerland), Garoto (Brazil), Nestle Japan (Japan), Dreyer's (U.S.) & Rowntree's (U.K.) among others. The company had 291,000 employees in its organization in December, 2019.

Mars, Incorporated headquartered in Virginia, U.S. and founded in 1880. The company focuses on manufacturing of chocolates, pet food and various other food products. The company deals in different product segments such as Pet care, Mars Wrigley, Food and Edge among which edge is the market focussed category.

The company has wide global presence across the globe such as Americas, Asia-Pacific, Europe, and Africa. The company has its subsidiaries as well and they are Wrigley Company (U.S.), Pedigree Pet Food (U.S.), Banfield Pet Hospital (U.S.), Nutro products (U.S.) and Mars Japan Limited (Japan) among others.

Starbucks Coffee Company headquartered in the U.S. and is founded in 1971. The company focuses on coffee and all the related services like food savories among others. The company deals in different business segments and they are beverages, food, packaged and single serve-serve coffees, teas and others among which beverages is the market focussed segment. The company provide its products in market through various product categories such as drinks, foods, at home coffee, shopping bags in which drinks product category is market focused product category. For increasing its revenue as well as strengthening the position in market, the company takes strategic decisions.