Europe Small Scale LNG Market in road transportation is expected to grow with the CAGR of 7.3% in the forecast period of 2020 to 2027. The years considered for study are as mentioned below. 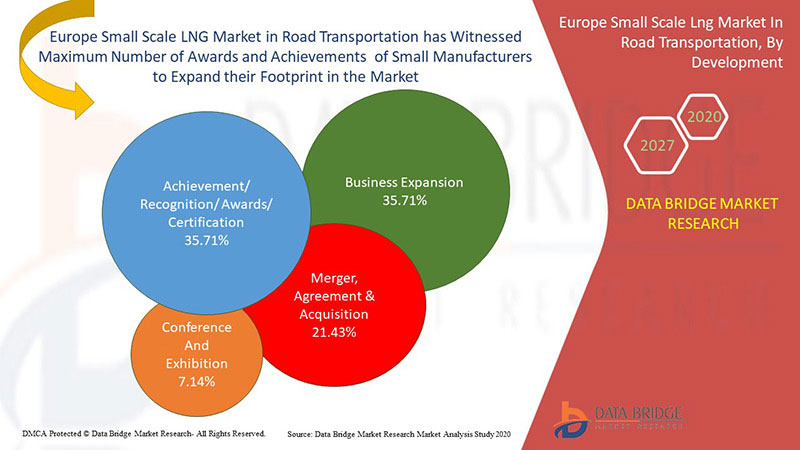 Royal Dutch Shell plc headquartered in Hague, the Netherlands which is engaged in manufacturing of upstream, integrated gas and new energies, downstream products. The company offers various products such as Motorists, Shell Energy, Business customers, Energy and innovation and the market focused product is Energy and innovation in small scale LNG market in road transportation.

The company has wide presence across the globe such as Asia-Pacific, Europe, North America, South America and Middle East and Africa.

WÄRTSILÄ established in 1834 and is headquartered in Madrid, Spain. The company is engaged in manufacturing of smart technologies and complete lifecycle solutions for the marine and energy markets. The company offers various products such as Marine and Energy among which coating Energy is market focused segment.

The company has wide presence in Americas, Europe, Africa, and Asia. In addition to it, the company also generates its revenue from the various subsidiary companies such as Wartsila Italia S.p.A. (Italy), Eniram Oy (Finland), Wärtsilä ELAC Nautik GmbH (Germany), and Guidance Marine (U.K.) and among others. For instance,

bp p.l.c. ENGIE, and Siemens are Dominating the Global Small-Scale LNG Market in 2019