In June 2021, Telpo Launched a Biometric B10 Time Attendance Machine to Track the Time and Attendance of the Employees

The government is using the biometric system for various purposes. They are using it for access control, boarder security, financial and banking services, healthcare sector, and others. These systems are used in airports to track immigrants to check national ID, e-passports and e-visas, also, these are used in offices to record time and attendance of employees. The financial institute also use it for safer and secure online payments.

Global Biometrics in the Government Market is expected to reach USD 24,272.95 million by 2028 from USD 8,762.11 million in 2020, growing with the CAGR of 14.7% in the forecast period of 2021 to 2028. Rising use of biometrics in government to maintain the central database of citizens for national ID is the major driving factor expected to boost the market growth. However, the risk of security due to data breach can prove to be a challenge for market growth.

The use of biometric-based consumer electronic devices is overgrowing. The fingerprint and facial recognition system are integrated with electronic devices such as laptops, mobiles and other smart handheld devices. The system is also used for access control door locks, security systems, home automation, and IoT, automotive, game consoles and mobile devices. Thus, using the biometric system in consumer electronic devices can assist the user in protecting its data. The system also helps secure an individual's identity from fraud, which is expected to drive the growth of global biometrics in government market.

Global biometrics in government market is segmented into five notable segments based on the mode, components, type, authentication and application.

The multiple factor authentication segment will emerge as the dominating segment under authentication segment. This is because of the growing number of technological advancements in the market especially in the developing economies. Further, growth and expansion of research development services on a global scale will further bolster the growth of this segment.

The civil segment will emerge as the dominating segment under application. This is because of the growing number of infrastructural development activities in the market especially in the developing economies. Further, growth and expansion of the semiconductors and electronics industry all around the globe will further bolster the growth of this segment. 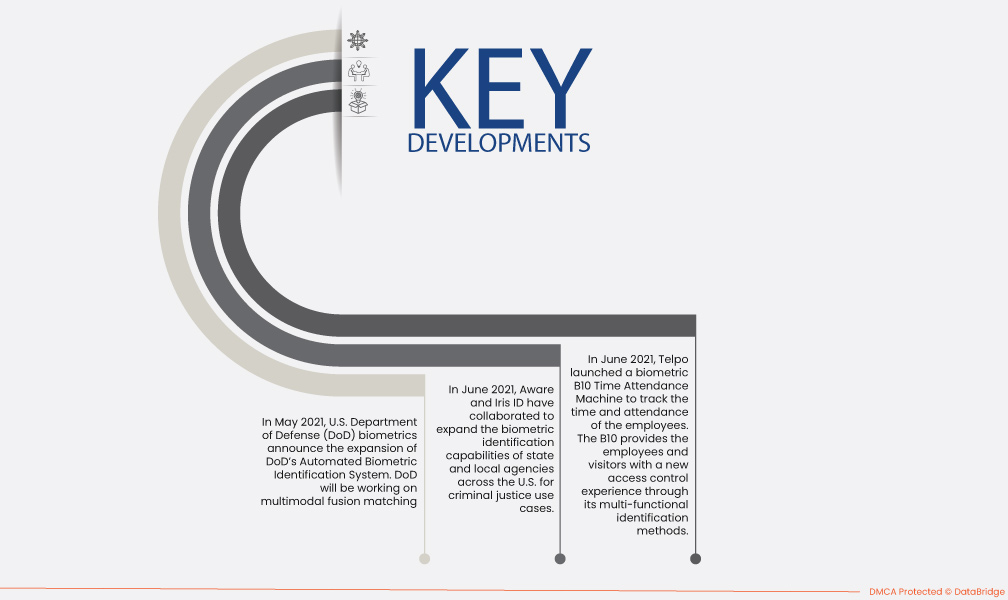 As a result of the adoption of various government rules and regulations, the Asia-Pacific area will also experience significant growth as most commercial and governmental offices and businesses adopt biometric security systems.

The majority of the market's manufacturing, developing, production and logistical divisions have had a very difficult time because of the coronavirus epidemic. Governments in several nations placed limitations because of this pandemic situation. These limitations have significantly negatively influenced biometrics in the government market. All manufacturing facilities and other working establishments that rely on biometrics to deter trespassers and preserve the security of their facilities have been forced to close because of the pandemic scenario. Additionally, fewer people have registered for government-mandated schemes for individual identification because of these restrictions.

For more detailed information about the biometrics in government on market report, click here – https://www.databridgemarketresearch.com/reports/global-biometrics-in-government-market

Global Biometrics in Government Market – Industry Trends and Forecast to 2028

Europe Biometrics in Government Market – Industry Trends and Forecast to 2028