The Global Cheese Based Snacks Market is expected to grow with a CAGR of 7.0% in the forecast period of 2022 to 2029. The years considered for the study are as mentioned below.

The global cheese based snacks market is a highly consolidated market, including a specific number of key players. The market has witnessed increased strategic developments owing to favorable market scenarios.

The major players dealing in the global cheese based snacks market are introducing a strong range of products providers and adopting strategic initiatives such as partnership, acquisition, business expansion, award, and recognition into the market. This helped companies to maximize sales with an enhanced product portfolio. 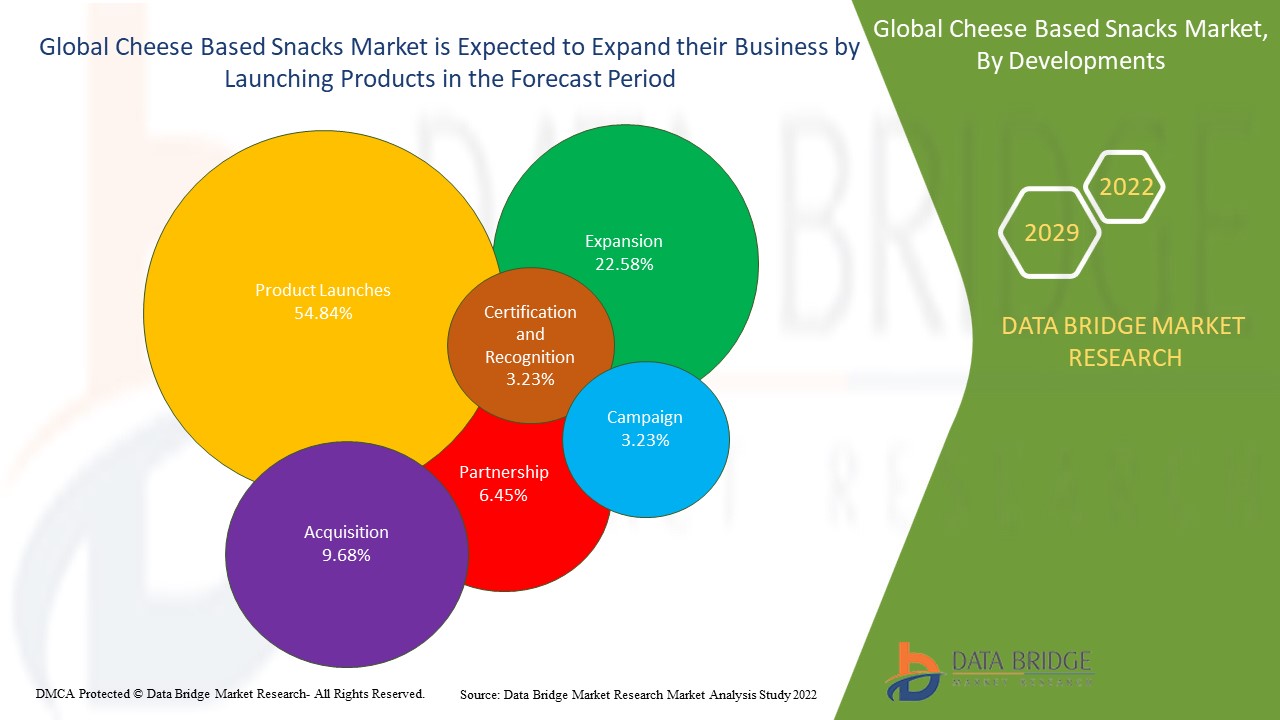 The company has a wide presence across North America, Latin America, the Middle East and Africa, Asia-Pacific, Europe. Some of the subsidiaries are Frito-Lay (U.S.), The Gatorade Company (U.S.), SodaStream (U.K.), Sabritas (Mexico), Walkers (U.K.), Quaker Oats Company (U.S.), among others

Kellogg Co. was founded in 1906 and is headquartered in Michigan, U.S. It has public ownership. The company's main focus is on creating better days for people with their trusted food brands. The company has business segments such as snacks, cereal, frozen, noodles, and others, and among them, Snacks are the market-focused segment. The company offers various product categories, including breakfast favorites & treats, cereal & granola, savory snacks, plant-based proteins, snack bars & bites, protein bars & shakes frozen breakfast, in which savory snacks is the market-focused category.

McCain Foods Limited was founded in 1957 and is headquartered in Toronto, Canada. It has private ownership. The company focuses on manufacturing frozen potato products and supplying french fries, potato specialties, and appetizers to food services and retailers. The company has product categories including All Time Favourite, Local Delight, Cheese Lovers, and Cheese Lovers is the market-focused category. It offers products under various brand categories such as McCain Foods, Van Geloven, Lutosa, CelaVita, Infinity Foods, Day & Ross, under which McCain Foods is the market-focused brand category.

The company has a presence across North America, Europe, Asia-Pacific, South America, the Middle East and Africa.

Global Cheese Based Snacks Market – Industry Trends and Forecast to 2029

Europe Cheese Based Snacks Market – Industry Trends and Forecast to 2029