IgA nephropathy, also known as Buerger's disease, is a kidney disease that occurs when IgA concentration builds up in the kidneys, causing inflammation that damages the kidney tissues. It is an orphan disease, designated as an orphan indication in both the U.S. and Europe. According to the report updated in May 2019, about 10% of the biopsies performed for glomerular disease (GD) are for IgA nephropathy in the United States. The number of patients infected with IgA disorder is increasing, and this increases the chances of multiple complications associated with it. Thus, the rising number contributes to the IgA prevalence worldwide, leading to the increasing demand for IgA nephropathy treatment products. Thus, the global rise in IgA nephropathy disorder acts as a driver for global IgA nephropathy market growth.

Data Bridge Market Research analyses that the IgA nephropathy market is expected to grow at a CAGR of 9.2% in the forecast period of 2021 to 2028 and is expected to reach USD 9,124.84 million by 2028. The companies are investing a huge amount for their research & development program and have shown some strategic initiatives in which, during the pandemic the Chinook therapeutics have to increase the funding for R & D. The increasing research and development for the IgA nephropathy will act as a driver for the forecast period in global IgA nephropathy market.

The government provides research grants to help organizations ready to participate in drug discovery and development for that disease. Various organizations focused on a particular disease, In IgA neuropathy, IgA Nephropathy Foundation's, National Kidney Foundation Inc., Renal Pathology Society, among others, are some of the above-mentioned disorders. According to a report in 2019, Ventures capitalists are financing a crop of startups seeking to revolutionize a kidney disease. They are making huge investments in kidney research, which is expected to be an opportunity for market research. The increased investment and funding by government organization and other private investment agencies will increase the opportunities for the market and fuel up the global IgA nephropathy market in the forecasted period.

Global IgA nephropathy market is categorized into seven notable segments which are based on the disease type, symptoms, type, population type, route of administration, end user and distribution channel.

The diagnosis segment is expected to dominate the market growing with the highest CAGR of 9.3%

In 2021, the diagnosis segment is expected to dominate the market growing with the highest CAGR of 9.3% in the forecast period of 2021 to 2028 due to the fact that prior given the treatment, the proper detection and tracing of the IgA nephropathy is necessary which is possible only through the primary detection such as blood and urine test and confirmatory detection by kidney biopsy which are the major factor of this segment to dominate.

The hospitals segment is expected to dominate the market growing with the highest CAGR of 9.7%

In 2021, the hospitals segment is expected to dominate the market, with the highest CAGR of 9.7% in the forecast period of 2021 to 2028 due to its strong financial structure. The hospitals segment is growing due to the presence of trained professionals. The hospitals department has well-trained staff with a professional team for proper and better diagnosis and treatment of the patients. The major driving factor is that they provide communal benefits with more patient satisfaction. 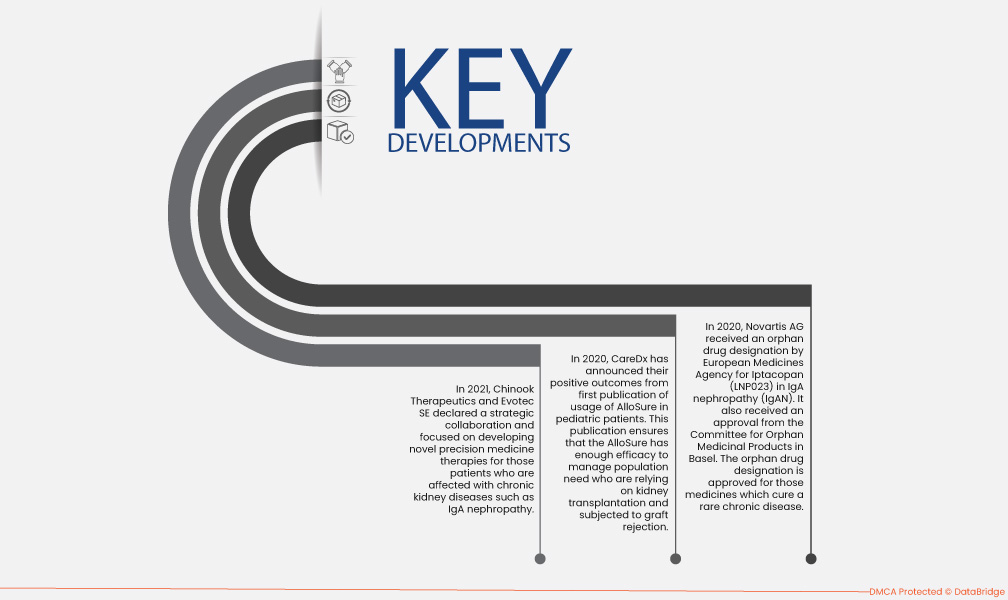 Asia-Pacific is expected to grow during the forecast period due to the presence of major market players and rising government initiatives in this region. In addition to this, development of healthcare infrastructure is expected propel the market's growth rate in this region.

How does high cost of the treatment procedure further impact overall growth rate of the market?

The treatment cost of the particular disease is mainly seen as the restraint for the market or a factor that can limit growth. IgA nephropathy treatment comprises diagnosis and further treatment with various drugs, starting from blood pressure-lowering agents, immunosuppressive agents, cholesterol lowering, and various supplements. The disease diagnosis has various blood tests, urinalysis and some radioactive tests, and the most important kidney biopsy. The total cost of treatment or the cumulative expense of diagnosis and treatment is quite high. The below-given instance will describe the cost per pocket if the reimbursement is not provided, which is a major drawback in emerging countries. For instance, The Average cost of kidney biopsy in the U.S. is USD 4,995, the estimated national average for the U.S. Moreover, the biopsy is the most accurate and optimum test for the diagnosis of IgA nephropathy. Although the test price is high, which is expected to limit the use of biopsies and hinder the market growth. Hence, the cost of treatment and diagnosis is expected to be one of the major factors. The demand is supposed to decrease, which will negatively impact the market and act as a restraint for the market growth in the forecast period.