IoT Node and Gateway Market is expected to grow with the CAGR of 17.3% in the forecast period of 2020 to 2027. The years considered for study are as mentioned below.

IoT node and gateway market is a strongly growing market, which includes specific number of key players as well as local players. The market has witnessed increase in various strategic developments owing to favourable market scenario.

The major players dealing in global IoT node and gateway market are introducing strong range of product portfolio. This helped company to maximize the sales with enhance product portfolio to attract the potential customers. For instance In January 2020, Cisco Company introduced new products for the global market under the Industrial IoT solutions. New Industrial IoT offers improved visibility, data collection and security for data management. The company is introducing new products to meet the demand of security in operations for customers, through this the company would strengthen their product portfolio and increase customer base. 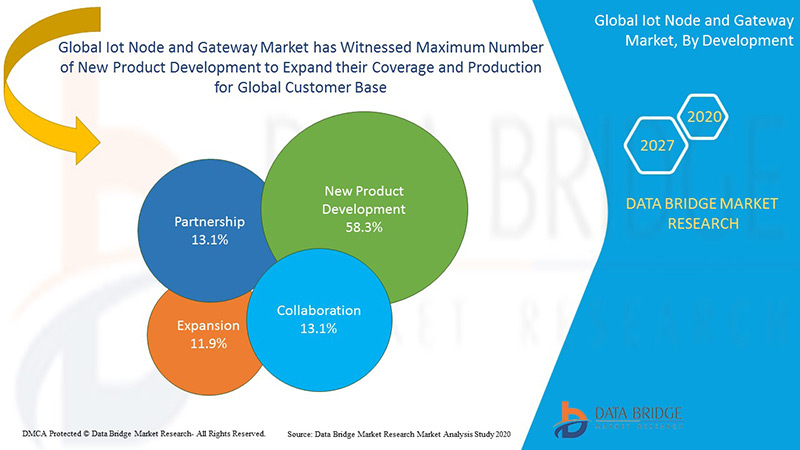 The company has wide global presence across the globe such as Asia-Pacific, Europe, South America, North America, and Middle East &Africa. In addition to it, the company also generates its revenue from the various subsidiary companies such as 3401 Hillview LLC (U.S.), 900 West Park Drive LLC (U.S.), A.W.S. Holding, LLC (U.S.), AetherPal (India) Private Limited (India), AetherPal Inc. (U.S.) among others.

EUROTECH headquartered in Udine, Italy which was established in 1992. The company performs its business from segments such as industrial and services. The products offered are boards and modules, subsystems, networking and storage, high performance embedded computing, intelligent sensors, IoT, complementary products. The company focuses on pervasive or ubiquitous computing which combines the smart devices in real world and their connection and communication through network, cloud and IoT. The market focused category falls into IoT.

The company has wide global presence across the globe such as U.S., U.K., France, Japan. In addition to it, the company also generates its revenue from the various subsidiary companies such AdvanetInc.,(Japan), EurotechLtd, (U.S.), EurotechFrance, (France),EurotechFinland OY, (Finland), NeuriCamSpA, (Italy) among others.

NXP Semiconductors has headquartered in Eindhoven, Netherlands and it was incorporated in 2006. The company has a strong product portfolio under product categories such as processors and MCUS, audio, interfaces, peripherals and logic, power management, sensors, RF, RFID/NFC, security and authentication, wireless connectivity. The company offers secure connectivity solutions to industries such as mobile, automotive, industrial & IoT and communication infrastructure for embedded applications. The company perform their business through segment such as automotive, industrial & IoT, mobile, comm. infra. & other.