The optical power meter is a device that detects the power of an optical signal in an optical cable. Optical power meters are available for evaluating single-mode and multimode fiber networks at various wavelengths such as 850/1300/1310/ 1490/1550/1625nm. These meters are primarily used in fiber-optic network installation, maintenance, and testing. With technological improvements, the optical power measuring market has become quite competitive. Additional benefits of the new optical power meter on the market include a high-visibility, high-resolution colour screen, a great man-machine interface, wireless capabilities, and green production processes.

Data Bridge Market Research analyses that the optical power meter market is expected to grow at a CAGR of 5.8% in the forecast period of 2021 to 2028 and is expected to reach USD 138.04 million by 2028. Several factors influence the market's growth rate. The growing demand for more capacity in the telecommunications industry has resulted in an increase in the demand for extremely precise optical power meters and improved connectivity, new technologies, and the growing requirement for real-time analysis. Furthermore, device accuracy for proper fault identification and inspection, increased safety in conjunction with environmental standards, and increased automation application are some of the major drivers driving the optical power meter market over the projection period.

Rising demand from industries to experience uninterrupted services is expected to drive the market's growth rate during the forecast period.

The optical power meter market is estimated to grow in response to increased demand from industries for reliable services. Optical power meters are equipped with cutting-edge connectors, electronics, and wireless technology to support continuous fiber network expansion while ensuring OPM speed and reliability. Due to the necessity for optical power meters, service providers must expand their fiber network to households, companies, and data centers while preserving quality of experience and lowering operational costs. According to NTT-Advanced Technologies, connector end-face contamination is the major cause of network failure for 98% of cable installations. These issues can be avoided by incorporating fiber cleaning and inspection capabilities into optical power measurement equipment. For instance, EXFO Inc. agreed to deliver optical test heads and test access switching from its cloud-based Nova Fiber remote fiber test system in 2021. Additionally, modern optical power meters have been changed to increase battery life and Bluetooth connection for industrial devices, which is expected to drive market expansion throughout the forecast period.

In 2021, the photodetectors segment of type segment is anticipated to dominate the optical power meter market 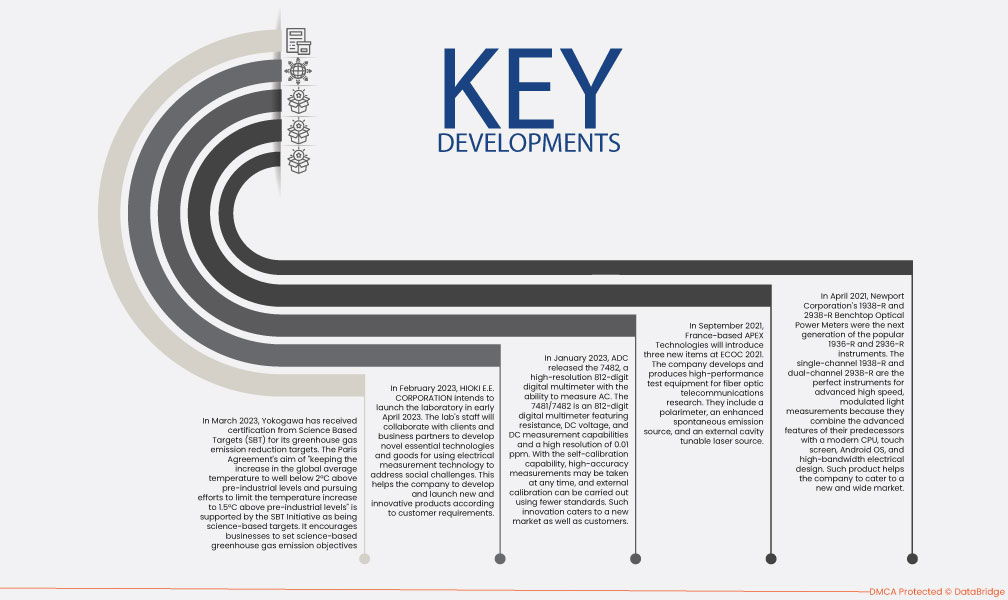 Asia-Pacific will continue to dominate the optical power meter market in terms of market share and market revenue and will continue to flourish its dominance during the forecast period due to the expansion of the telecommunication industry in this region. China dominates the Asia Pacific region due to the growing digitalization and rising power grid problems.

North America region is anticipated to grow at the highest rate during the forecast period of 2021-2028 due to the region's rising technological advancement and well-established technology infrastructure. The United States dominates the North American region due to presence of most technologically advanced leaders in the market for providing cutting edge technology in the region.

Over the last 18 months, almost every industry on the planet has suffered a setback. This can be ascribed to severe disruptions in their respective manufacturing and supply-chain operations, resulting from multiple precautionary lockdowns and other limitations imposed by governments all over the world. The optical power meter market is no exception. A global lack of raw supplies, halts, and supply chain disruption affected manufacturing. Government limitations, such as working with half the workforce and fewer operational hours, have hampered the market's production cycle since the outbreak. The termination of active market-related projects lowered demand from end-user industries such as automotive and industrial, mining, electrical and electronics, telecommunications, and others. Furthermore, consumer preferences has decreased as people are now much more concentrated on removing non-essential expenses from their budgets as the wider economic situation of most people has been adversely impacted by this outbreak. Over the forecast period, the aforementioned factors are likely to have a negative impact on the optical power meter markets revenue trajectory.