Global Ready To Drink/High Strength Premixes Market is expected to grow at a CAGR of 3.4% in the forecast period 2020 to 2027. The years considered for study are as mentioned below.

Global ready to drink/ high strength premixes market is a highly consolidated market, which includes specific number of key players as well as local players. The market has witnessed increased various strategic developments in expanding their production facility for manufacturing of different protein ingredients, various acquisitions and partnership to enter in specific market have led the manufacturers to established their foot prints.

The major players dealing in global ready to drink/ high strength premixes market are introducing strong range of product portfolio. This has also helped the company to maximize the sales with enhanced product portfolio. For instance, In December 2019, SUNTORY HOLDINGS LIMITED has launched its new product in market called OakSmith.  This new product is being launched in India as a spirit, as Indian market is a high growing market. This launch of the product has increased the customer base of the company and hence helped the high revenue generation.

Anheuser-Busch InBev is the dominating player in the meat extract market and accounts the highest market share in 2019, which is followed by Carlsberg Breweries A/S, SUNTORY HOLDINGS LIMITED and others. 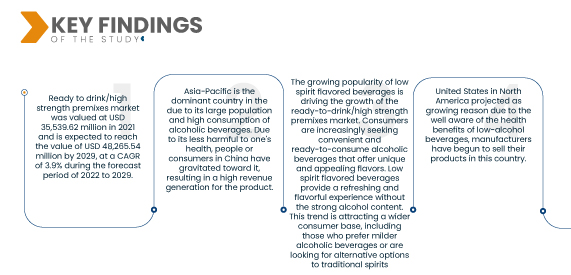 Anheuser-Busch InBev headquartered in Belgium as well as in the U.S. The company is engaged in providing high quality alcoholic beverages (beer). The company has also taken certain strategic decision to enhance their business in market.

The company has wide global presence across the globe such as Americas, Europe, Asia-Pacific, Africa. The company provides its products in market through its subsidiaries such as SABMiller (South Africa), Anheuser-Busch (U.S.), Ambev (Brazil), Beck's Brewery (Germany) and Bavaria Brewery (Colombia).

Carlsberg Breweries A/S is headquartered in Denmark and founded in 1847. This company offers in the production of beer, with high class taste and experience for their customers. The company deals in different business segments such as beer and non beer.

The company has wide global presence across the globe such as Europe and Asia. The company has its subsidiaries as well and they are Carlsberg Foundation (Denmark), Baltika Brewery (Russia), Feldschlosschen Getranke Holding AG (Feldschlösschen Getränke) (Switzerland), Aldaris (Latvia), Jacobsen (Denmark).

SUNTORY HOLDINGS LIMITED is headquartered in Japan and was found in 1899. This company is engaged in providing products related to premium spirits. The company deals in different business segments such as beverages and foods, alcoholic beverages.