Sepsis is a life-threatening disease induced by an overactive immune system in reaction to an infection. As per recent studies, the global prevalence of this life-threatening condition is increasing. World Health Organization (WHO) estimates that this ailment affects over 30 million individuals worldwide and causes over 6 million deaths per year. According to the same source, around 3 million babies and 1.2 million children worldwide are affected by this disease each year. Current sepsis diagnosis approaches rely on non-specific physiological and clinical criteria, making it difficult to distinguish sepsis from a systemic inflammatory response induced by normal inflammation. The preliminary test for infection, coagulation, and reduced oxygen availability is blood testing. 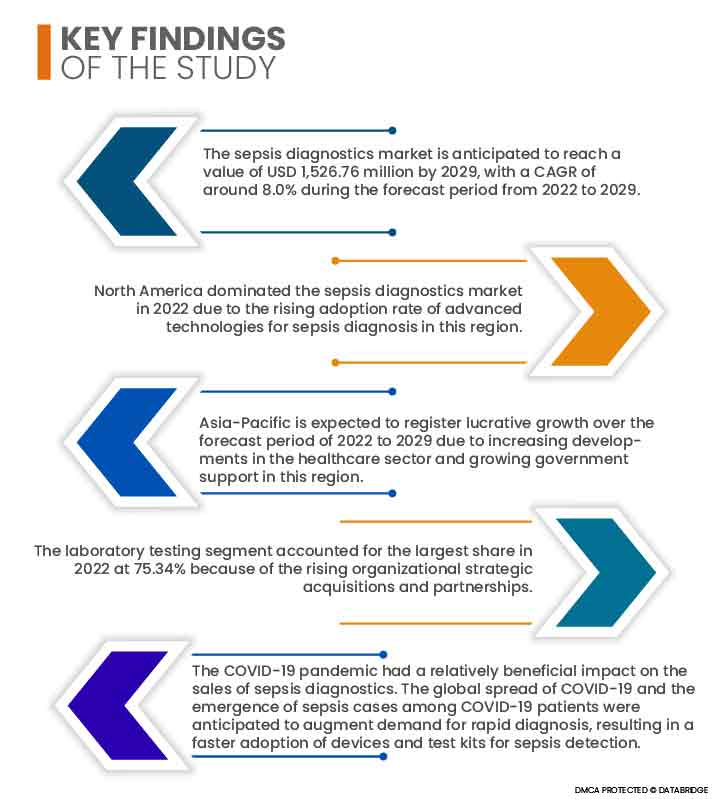 Rising prevalence of hospital-acquired infections (HAIs) is expected to drive the market's growth rate during the forecast period.

The most prevalent consequences among hospitalized patients are hospital-acquired infections (HAIs). HAIs, also known as nosocomial infections, are a leading source of morbidity and mortality in hospitals around the world. Urinary tract infections, pneumonia, and sepsis are the most frequent hospital-acquired infections (HAIs). As per the "2020 National and State Healthcare-Associated Infections Progress Report" published by the Centers for Disease Control and Prevention (CDC) in 2021, there was a 24 percent, 35 percent, and 15 percent increase in central line-associated bloodstream infections, ventilator-associated events, and Methicillin-resistant Staphylococcus Aureus (MRSA) bacteremia in the United States between 2019 and 2020. As bloodstream infections rise, sepsis diagnostic tools will become more widely used.

The sepsis diagnostics market is segmented on the basis of techniques and test type.

In 2022, the immunoassay segment of techniques segment is anticipated to dominate the sepsis diagnostics market

In 2022, the laboratory testing segment is projected to hold the largest share of test type segment in the sepsis diagnostics market

North America will continue to dominate the Sepsis diagnostics market in terms of market share and market revenue and will continue to flourish its dominance during the forecast period due to the presence of major key players and well-developed healthcare infrastructure in this region. Also, surging number of the adult population getting diagnosed positive for sepsis will propel the market's growth rate in this region. U.S. dominates the North American region due to the rising adoption rate of advanced technologies for sepsis diagnosis.

The COVID-19 pandemic had a relatively beneficial impact on the sales of sepsis diagnostics. The global spread of COVID-19 and the emergence of sepsis cases among COVID-19 patients were anticipated to augment demand for rapid diagnosis, resulting in a faster adoption of devices, reagents, and test kits for sepsis detection. People postponed health exams as a result of the pandemic, reducing the number of tests performed and reagent sales. The present COVID-19 outbreak has brought attention to the risk that older persons face, as they are more prone to complications such as acute respiratory distress syndrome, which is usually caused by pneumonia and raises the risk of sepsis. As a result, early detection of sepsis in patients with COVID-19 infections is becoming more important.