In market sulfuric acid is available in different concentration grades such as 98%, 96.5%, 76%, 70% and 38%. Sulfuric acid is a strong acid with hygroscopic characteristics and oxidizing properties. It is used in the fertilizer, chemical, synthetic textile, and pigment industries. A large quantity of sulfuric acid produces potassium sulfates and fertilizers.

The global sulfuric acid market is expected to reach USD 2,58,98,281.42 thousand by 2029 from USD 2,04,26,454.45 thousand in 2021, growing with a substantial CAGR of 3.4% in the forecast period of 2022 to 2029. Increasing demand for fertilizers in the agriculture industry and the growing demand for sulfuric acid across various industries are some of the drivers boosting sulfuric acid demand in the market. With the increasing consumption of sulfuric acid globally, major players are expanding their production capacities in different countries to strengthen their presence in the market. 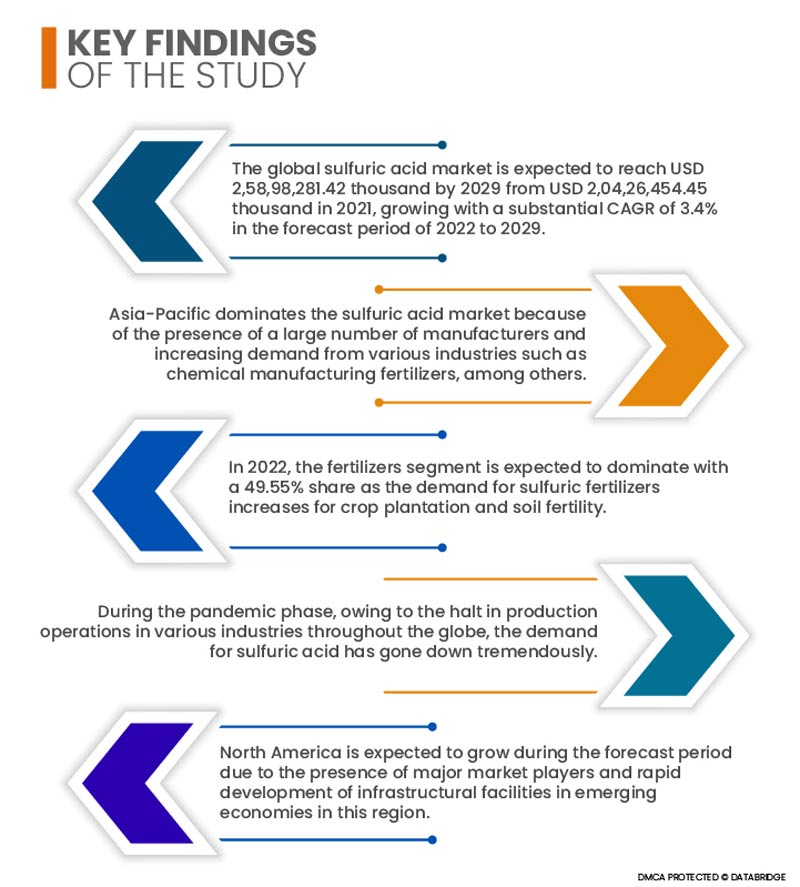 The demand for high-quality fertilizers is increasing in the agricultural industry. Several fertilizers are manufactured from sulfuric acid, which helps to increase crop production and soil fertility. The sulfuric acid can easily be mixed with the soil and liquid fertilizers. Increased expenditure by public and private players on agricultural infrastructure development will also promote the market growth rate. Continuous research and development in the ingredients have further increased the acceptance of organic fertilizers.

The sulfuric acid can be transported and made available via both online and offline modes of distribution. However, out of the two, the offline segment is expected to dominate the global sulfuric acid market with a 70.95% share. This is because of the traditional approach of farmers and agriculturalists to stick to traditional modes of purchasing. Moreover, rising number of small scale retailers especially in the emerging economies will widen the scope of growth further.

The demand for high-quality fertilizers is increasing in the agricultural industry. Several fertilizers are manufactured from sulfuric acid, which helps to increase crop production and soil fertility. The sulfuric acid can easily be mixed with the soil and liquid fertilizers. Also, growth and expansion of the agricultural industry will widen the scope of growth for the market. Rising adoption of technologically advanced machinery and equipment by the major players in the manufacturing of fertilizers and other agrochemicals will yet again emerge as an important market growth determinant. Increased expenditure by public and private players on the development of agricultural infrastructure will also promote the market growth rate. Continuous research and development in the ingredients has further increased acceptance of organic fertilizers.

In 2022, Asia-Pacific dominates the sulfuric acid market because of the presence of a large number of manufacturers and increasing demand from various industries such as chemical manufacturing fertilizers, among others. Moreover rising number of research and development activities in combination with the growth and expansion of agricultural industry is also boosting the sulfuric acid market growth

North America is expected to grow during the forecast period due to the presence of major market players and rapid development of infrastructural facilities in emerging economies in this region. In addition to this, rising private and public expenditure on the development of chemicals industry infrastructure in the developing and backward economies and increasing per-capita income are expected to propel the market's growth rate in this region. Also, increasing demand for phosphate fertilizer production to enhance the quality of irrigation water and increasing demand for the manufacturing of sulfuric acid from elemental sulfur owing to its environmentally-friendly property are other important market growth determinants.

COVID-19 brought an epidemic on the industries especially the manufacturing industry. Restrictions imposed on the transportation and movement all together negatively impacted the market. Further disruptions in the supply chain, including logistics, storage and warehousing. Due to the halt in production operations in various industries throughout the globe, the demand for sulfuric acid has gone down tremendously. Also, with the continuously dropping requirements of automotive petroleum refining and many other industries, the manufacturers' margins are declining, which they earn from the supply of sulfuric acid. However, the governments are taking steps to relax tax, fiscal deficit, and others to minimize the impact. These steps might stabilize the situation of sulfuric acid in the future and help the market grow as it was before the pandemic.