Europe Sulfuric Acid Market is expected to grow with the CAGR of 4.8% in the forecast period of 2021 to 2028. The years considered for study are as mentioned below.

Aurubis AG has received the certification of ISO 9001 for quality management. This update helps the company to increase customer confidence which generates the revenue in future. 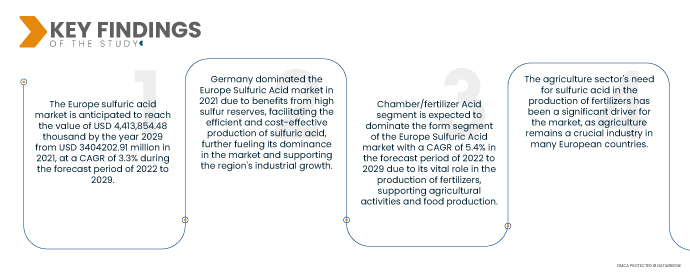 Aurubis AG founded in 1866 and is headquartered in Hamburg, Germany which is engaged in is engaged in production of high-purity as well as high-quality copper from the copper concentrates and processes it into the intermediate products such as continuous cast rod and profiles made of copper and copper alloys.  It also manufactures precious metals such as gold and silver along with huge range of other products, like sulfuric acid and iron silicate and many others. The company offers various products such as Rod & Specialty Wire, Shapes, Architectural Solutions, Industrial Rolled Products, Cathodes, Bars & Profiles, Precious Metals, Sulfuric Acid & others, Recycling, Minor Metals, Smelter Intermediates, and Services and the market focused product is Sulfuric Acid & others.

The company has wide presence across the globe such as North America, Europe, Asia, and Middle East.

Boliden Group founded in 1924 and is headquartered in Stockholm, Sweden. The company is engaged in the manufacturing of metal production and other chemicals products through smelters process. The company offers various products such as Zinc, Copper, Lead, Nickel, Gold, Silver, Sulphuric acid, Concentrate and By-products among which Sulphuric acid is market focused segment.

The company has wide presence in Europe and North America. In addition to it, the company also generates its revenue from the subsidiary companies such as Apirsa SL (Spain).

INEOS founded in 1890 and is headquartered in London, U.K. The company is engaged in the manufacturing of petrochemicals, specialty chemicals and oil products for different metals and wood materials. The company offers various products such as petr O&P North America, O&P Europe and Chemical Intermediates among which Chemicals, Oil and Gas and Automotive is market focused segment.