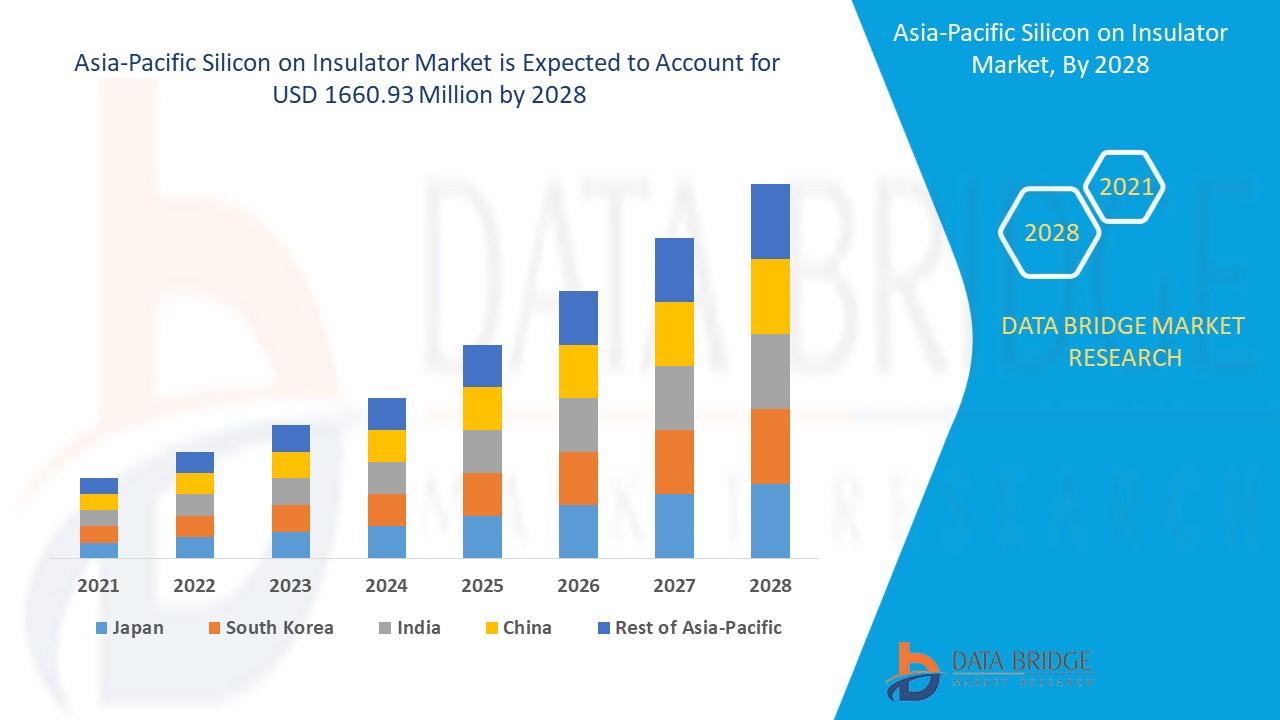 Market Analysis and Insights of Silicon on Insulator Market

Growing focus on the technological advancements by the major manufacturers, rising demand for consumer electronics especially in the developing economies, and increasing awareness about the benefits of silicon on insulator such as superior performance and low consumption of voltage are the major factors attributable to the growth of the silicon on insulator market. Data Bridge Market Research analyses that the silicon on insulator market will exhibit a CAGR of 15.10% for the forecast period of 2021-2028. Therefore, the market value, which was USD 539.2 million in 2020, would rocket up to USD 1660.93 million by 2028.

Rising globalization and growth in the demand for gaming consoles will emerge as the major market growth driving factor. Growing rate of industrialization especially in the developing economies, surging improvement in operational performance with low operating voltage and growth and expansion of various end user verticals will further aggravate the market value. Growing awareness about the benefits of this technology such as ease in scaling, compatibility, absence of latch up, reduced leakage, power saving, and high performance and increasing investments by foundry players and wafer manufacturers in emerging economies will further carve the way for the growth of the market.

However, dearth of knowledge and technological expertise and lack of awareness in the backward economies will act as a growth restraint for the market. Higher time needed in the manufacturing process will further dampen the growth rate of the market. Intricate design during product development and fluctuations in the prices of raw materials will further challenge the market growth rate.

The silicon on insulator market is segmented on the basis of wafer type, wafer size, product, technology and application. The growth amongst the different segments helps you in attaining the knowledge related to the different growth factors expected to be prevalent throughout the market and formulate different strategies to help identify core application areas and the difference in your target market.

The silicon on insulator market is analysed and market size, volume information is provided by country, wafer type, wafer size, product, technology and application as referenced above.

China in Asia-Pacific dominates the silicon on insulator market and will continue to flourish its trend of dominance during the forecast period. This is because of the increasing expenditure for research and development proficiencies in this region and growing investments by government and private sectors to develop advanced and new technologies.

The country section of the silicon on insulator market report also provides individual market impacting factors and changes in regulation in the market domestically that impacts the current and future trends of the market. Data points such as consumption volumes, production sites and volumes, import export analysis, price trend analysis, cost of raw materials, down-stream and upstream value chain analysis are some of the major pointers used to forecast the market scenario for individual countries. Also, presence and availability of global brands and their challenges faced due to large or scarce competition from local and domestic brands, impact of domestic tariffs and trade routes are considered while providing forecast analysis of the country data.

Global Silicon on Insulator Market - Industry Trends and Forecast to 2028

Europe Silicon on Insulator Market – Industry Trends and Forecast to 2028

Silicon on Insulator Market is Driven by Increasing Demand of Semiconductors