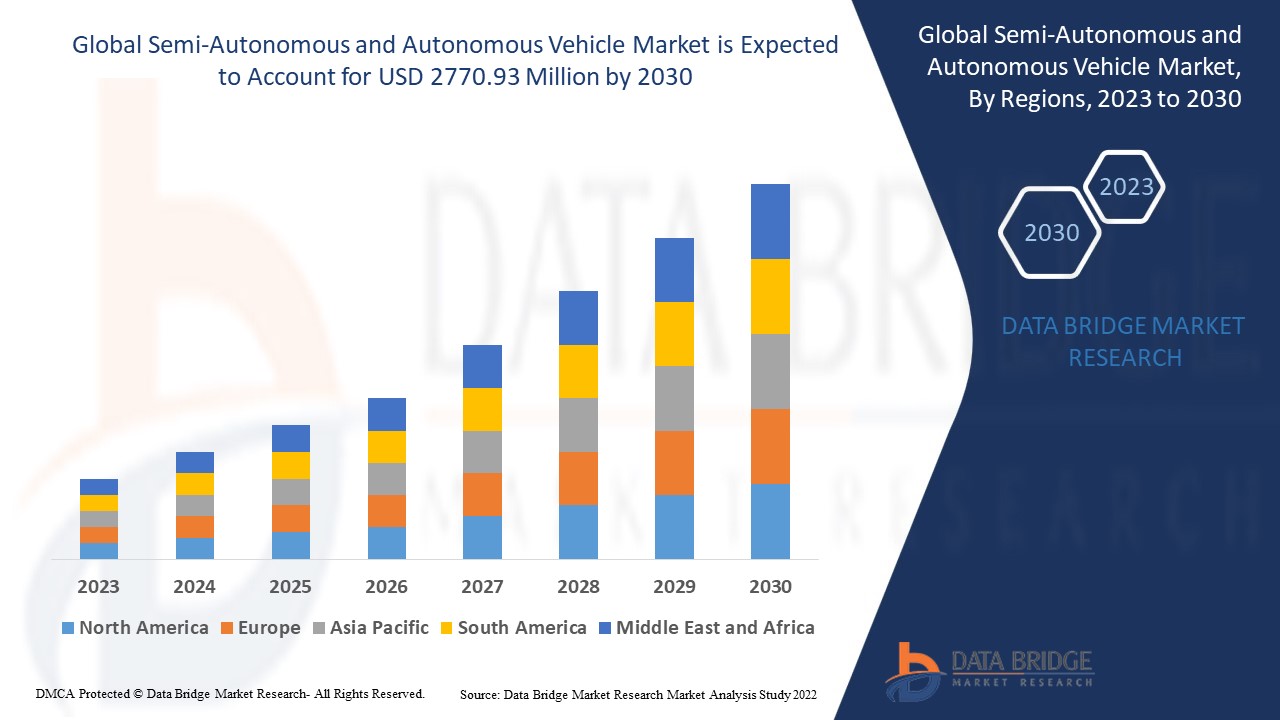 Data Bridge Market Research analyses that the semi-autonomous and autonomous vehicle market was valued at USD 2056.11 million in 2022 and is expected to reach USD 2770.93 million by 2030, registering a CAGR of 3.80% during the forecast period of 2023 to 2030. In addition to the market insights such as market value, growth rate, market segments, geographical coverage, market players, and market scenario, The market report curated by the Data Bridge Market Research team includes in-depth expert analysis, import/export analysis, pricing analysis, production consumption analysis, and pestle analysis.

Semi-autonomous and autonomous vehicles are highly fuel-efficient vehicles because these vehicles can accelerate and decelerate more proficiently than a human driver, decreasing fuel consumption. As a result fuel efficient property, increase the demand of semi-autonomous and autonomous vehicle which are expected to upsurge the revenue growth of the market, Furthermore, observable profits such as less carbon monoxide emissions and to reductions in fuel use will contribute to the sustainability and environmental goals.

Major manufacturers of vehicles are trying to create driverless vehicles by integrating cutting-edge technologies such as Internet of Things and artificial intelligence. The increasing demand to integrate new technologies in automobiles is generally driven by government programs to increase safety and security of consumer. Moreover, the integration of AI-based cameras is growing product demand among consumers and contributing to the expansion of the market. The market for semi-autonomous and autonomous vehicles is expanding owing to a rise in the adoption of cutting-edge technologies and create ample opportunities for the market growth.

The semi-autonomous and autonomous vehicles have high costs due to communication infrastructure and advanced technology in developing countries, which might obstruct the market size during forecast period.

The semi-autonomous and autonomous vehicle market is segmented on the basis of component, ADAS features, automation level, propulsion and application. The growth amongst these segments will help you analyze meagre growth segments in the industries and provide the users with a valuable market overview and market insights to help them make strategic decisions for identifying core market applications.

The semi-autonomous and autonomous vehicle market is analyzed and market size insights and trends are provided by country, component, ADAS features, automation level, propulsion and application as referenced above.

North America dominates the semi-autonomous and autonomous vehicle market in terms of market revenue and will continue to flourish its governance during the forecast period. This is owing to the growing demand for safer and fuel-efficient vehicles in this region. The increase in various issues concerning vehicle safety and rapid rise in the sales of automobiles will likely to boost the market growth rate.

Asia-pacific is expected to be the fastest developing regions during the forecast period of 2023-2030 due to the growing investment on global technology innovators. Moreover, high production and sales of luxury vehicles and the technological advancement will likely to drive the market growth rate.

The country section of the report also provides individual market impacting factors and changes in market regulation that impact the current and future trends of the market. Data points like down-stream and upstream value chain analysis, technical trends and porter's five forces analysis, case studies are some of the pointers used to forecast the market scenario for individual countries. Also, the presence and availability of global brands and their challenges faced due to large or scarce competition from local and domestic brands, impact of domestic tariffs and trade routes are considered while providing forecast analysis of the country data.

Some of the major players operating in the semi-autonomous and autonomous vehicle market are:

What is the current market value for semi-autonomous and autonomous vehicle market?

The market value for semi-autonomous and autonomous vehicle market in 2022 is USD 2056.11 million

What is the growth rate of the semi-autonomous and autonomous vehicle market?

The semi-autonomous and autonomous vehicle market is to grow at a CAGR of 3.80% during the forecast period of 2023 to 2030.