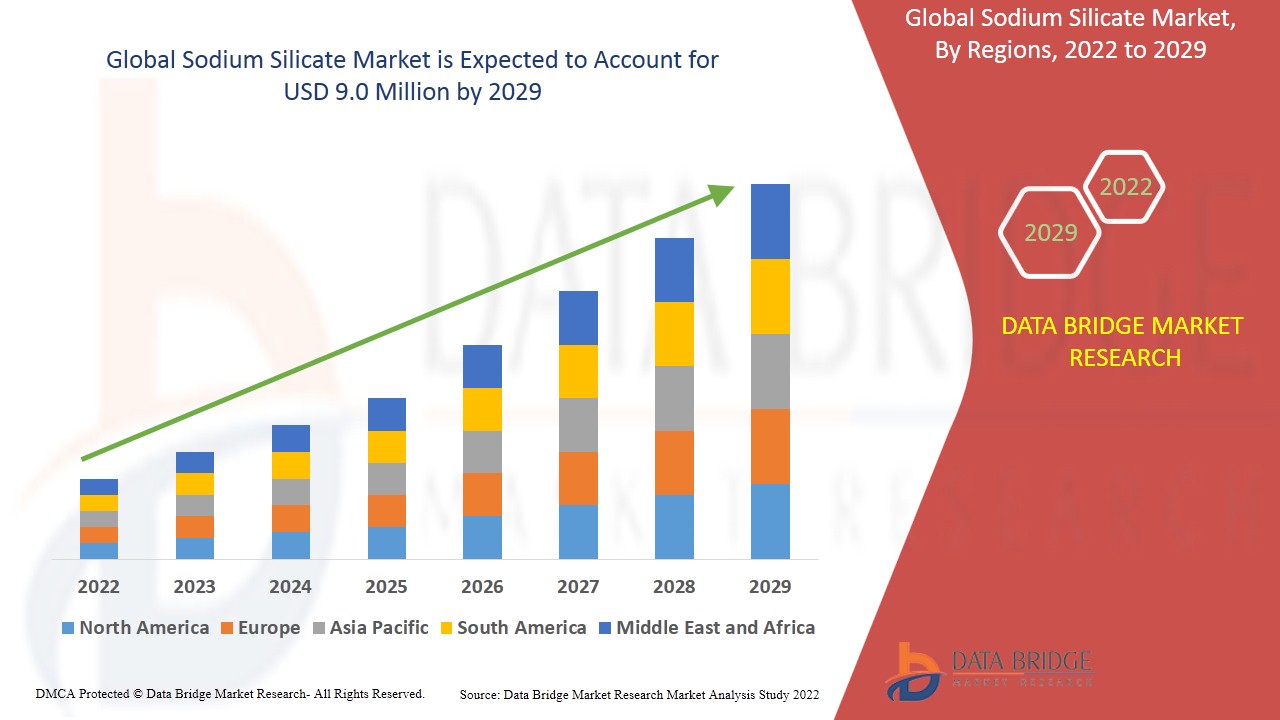 The sodium silicate market is expected to gain market growth in the forecast period of 2022 to 2029. Data Bridge Market Research analyses the market will stand tall by USD 9.0 million by 2029 to grow at a CAGR of 3.7% in the above-mentioned forecast period.

The factors such as increasing demand for detergents globally, accessibility of raw materials such as silica sand, soda ash, and rice husk are the root cause fueling up the market growth rate. The factors expected to cushion the growth of the sodium silicate market in the forecast period are the growing demand from the pulp and paper industry and rising use of liquid sodium silicate as an adhesive in various manufacturing applications. Additionally, the growing demand in wastepaper recycling and rising awareness on hygiene and sanitation are further expected to cushion the overall markets growth. The toxic nature of sodium silicate coupled with accessibility of substitute compounds for certain applications are expected to impede the growth of the sodium silicate market.

The increasing application of sodium silicates for various detergent operations, including de-inking paper, metal cleaning, laundering, textile processing and the growing demand for recycling waste paper are estimated to generate numerous opportunities for the market. On the flip side, the factors such as high storage and transportation cost of liquid sodium silicate are projected to pose as a major challenge to the growth of the sodium silicate market.

The sodium silicate market is segmented on the basis of type, form, grade, application and end use industry. The growth amongst the different segments helps you in attaining the knowledge related to the different growth factors expected to be prevalent throughout the market and formulate different strategies to help identify core application areas and the difference in your target market.

The sodium silicate market is segmented on the basis of type, form, grade, application and end use industry.

North America dominates the sodium silicate market owing to the increase in construction and infrastructural activities in the region. Asia-Pacific on the other hand, will continue to however show lucrative growth within the forecast period owing to the growing demand for sodium silicate in food and health care industries in emerging economies and increasing paper and pulp and detergent industries in the region.

The country section of the sodium silicate market report also provides individual market impacting factors and changes in regulation in the market domestically that impacts the current and future trends of the market. Data points such as consumption volumes, production sites and volumes, import export analysis, price trend analysis, cost of raw materials, down-stream and upstream value chain analysis are some of the major pointers used to forecast the market scenario for individual countries. Also, presence and availability of global brands and their challenges faced due to large or scarce competition from local and domestic brands, impact of domestic tariffs and trade routes are considered while providing forecast analysis of the country data.

Global Sodium Silicate Market is Expected to Reach USD 12.48 Billion by 2025 Due to Rising Demand of Detergent