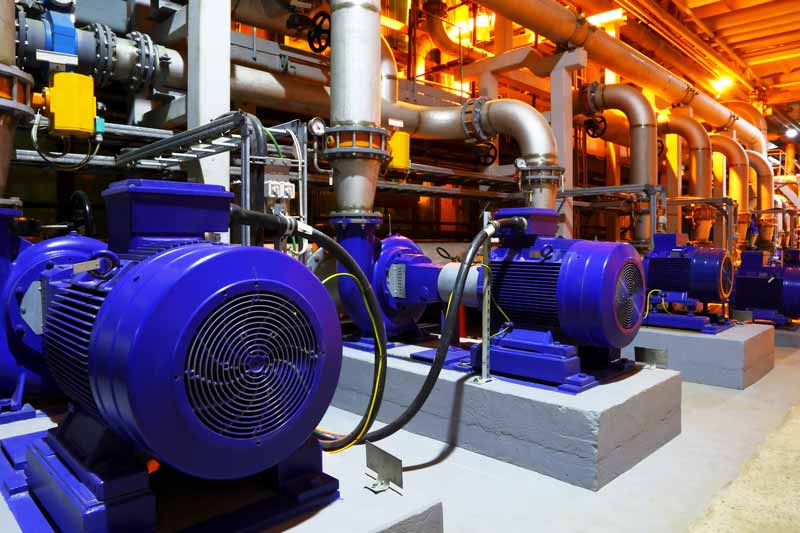 COVID-19 Impact on Power in Chemical and Materials Industry

COVID-19 Impact on Power in Chemical and Materials Industry

The power sector is considered as the engine or backbone of any economy. Infrastructure of any nation is highly dependent on the power sector as it supplies electricity. Almost in every sector, power is essential for smooth functioning. The importance of power sector has once again popped up in this time of pandemic that the entire world is facing in 2020. For sustained medical services and remote working under lockdown conditions, reliable electricity supply has become critical. The power sector comprises of generation, transmission and distribution. Recently, a shift has been noticed from the use of hydrocarbons to renewables such as wind and solar for generation of electricity. This electricity is then transmitted through lines to highways, international borders and is traded on global market as well. After receiving the electricity in industrial, commercial or residential areas, the distribution network takes over and delivers electricity to the end consumers.

Till 1990s, the power sector and network was owned by a handful of companies (or national agencies). Later, many countries in the world have unbundled their electricity utilities by separating generation, transmission and distribution. This has resulted in more private sector participation in the sector along with increased competition and lowered electricity prices. To ensure fair pricing and promoting renewable energy, conservation and efficiency and to build investor confidence, government has worked on the regulatory front of the sector.

The outbreak of novel coronavirus has affected many sectors of the economy and power sector is among those. Even after being in the category of essential good or service category, the demand for power has seen a decline in the pandemic. This has forced many plants to run on minimum technical load. Even many units of a plant are forced to shut their operations completely. This has reduced the requirement of coal drastically everywhere.

The prevailing lockdown in many countries has resulted in decreased power consumption by 67,000 MW since March 2020. The primary challenge that only power sector faces is that there is no scope of inventory. Units once generated cannot be taken back. In this lockdown, a huge amount of electricity was generated and all of them are represented as lost demand. In addition to this, government has urged the owners to supply power without any interruption even if the payments are not received for the next few months. But this pandemic has presented an opportunity for gas-based power generation to take advantage of the low prices but declined demand has restricted them to take the advantage of this opportunity.

The pandemic around the globe has drastically reduced the demand for electricity especially in the past few months in both commercial and industrial sectors. According to the International Energy Agency (IEA) in the Q1 of 2020, the global demand for electricity reduced by almost 2.5% and this decline is now forecasted to reach around 5% by the end of this year. In the mid-March and April, IFC has witnessed a decline of average 15% in demand in various countries where it is operational. This decline in demand has also resulted in decline in oil prices. Still volatility is expected due to various other factors that happened much before the outbreak of COVID-19. Natural gas prices reached its lowest before coronavirus due to the economic slowdown in China and record shale gas production in the United States. Spot prices in countries with a large share of renewables have reached levels close to zero marginal cost (for instance, in Brazil, Mexico, Peru and Turkey at certain hours). 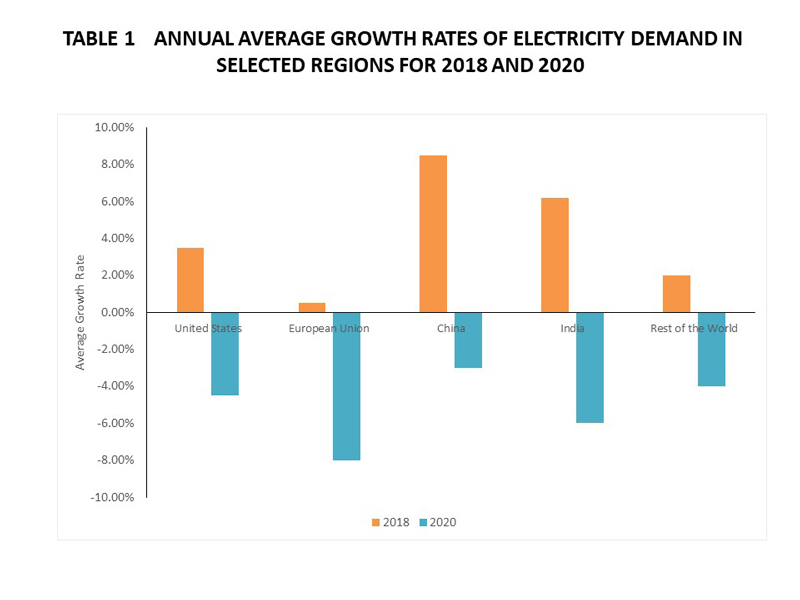 Another interesting thing that has come out of the pandemic is that the power generation from renewables has gone up by 3%. This increase is due to the upcoming new solar and wind projects through online channels. Considering the current circumstances, the resiliency provided by renewable power has attracted a lot of attention which has resulted in increased investments in renewables. Now as many economies around the globe are recovering, the growing demand of energy will be met by thermal power plant generation which will increase carbon emissions. If the prices of fossil fuels will remain low, there are chances that renewables could be crowded out especially in regions where the endowments of hydrocarbons are very high. On the other side, the reduced prices of gas has helped in generation of gas-fired power and may reduce the generation of carbon-intensive and coal-fired plants.

The job loss occurred in the pandemic has led to increased unemployment and thus, many people are not in the condition to pay their electricity bills. The delay in payment and delinquency of utility bills by customers (residential, commercial and industrial) may lead to detrimental effect along the energy supply chain. In many countries, government had to intervene so that the people can get regular electricity supply and also maintained the financial impact of the sector.

The decline in demand and delay in payments by end-user is restricting the ability of the companies that are associated with the distribution of power to pay power producers under long-term and take-or-pay power purchase agreements (PPAs). Many companies are facing liquidity issue and are in urgent need of support or they have to shut their operations. Many investors who rely on PPAs for the recovery of their investment and profits are worried and thus, not in the favor of investing more money in the sector. In many liberalized markets, the continuous dropping electricity prices has resulted in collapse of electricity market prices and hurting power generation companies.

The decline in profits and struggle of companies to sustain in the market has forced them to cease or decrease their capital expenditure and power sector is one in which this decrease has noticed largely. Various investment plans have been either postponed for indefinite period or are cancelled throughout the sector (from generation to transmission to distribution). Supply chain has also faced a sharp hit because manufacturing of power sector equipment has slowed down rapidly.

A little relief is that the COVID-19 situation in China is improving slowly. China is the country which is responsible for maximum solar supplies. The factories are re-opening in the country and the working conditions is stabilizing. But the ongoing lockdown and restrictions on local and international travel and trade in other countries have resulted in delay in project delivery and have also added huge construction costs.

Along with the sectors such as aviation, tourism, hospitality, retail, manufacturing and automotive, power sector has also suffered in India. The major losses faced by the country is due to payment delays mainly by State owned distribution companies (Discoms). The pandemic has resulted in bankruptcy of large generation capacities and vexatious regulatory inconsistency. As per the update by ICRA, the rating firm, the power distribution companies in India are expected to incur a loss of INR 20,000 crore along with other possible downsides from any extension of the lockdown. In a web conference, outlining the power sector, ICRA researchers have mentioned that the thermal PLF is likely to decline to 54% in FY2021 against 56% in FY2020 in a base-case scenario.

The nationwide lockdown is threatening to push an already moribund sector over the edge. The following are the areas where COVID-19 has impacted in India:

There has been dip in the energy consumption in year 2020. The industrial, commercial and traction has registered maximum dip in the demand while there has been an increase in demand of electricity from residential sector. Considering all the sectors, a decline of an average of 26% has been noticed only in the first week of lockdown in the country.

As there is no certainty of lockdown, this decline in electricity consumption will keep increasing. Till the economy regains the same level that was there before COVID-19, the medium term and long-term electricity demand will not re-establish properly 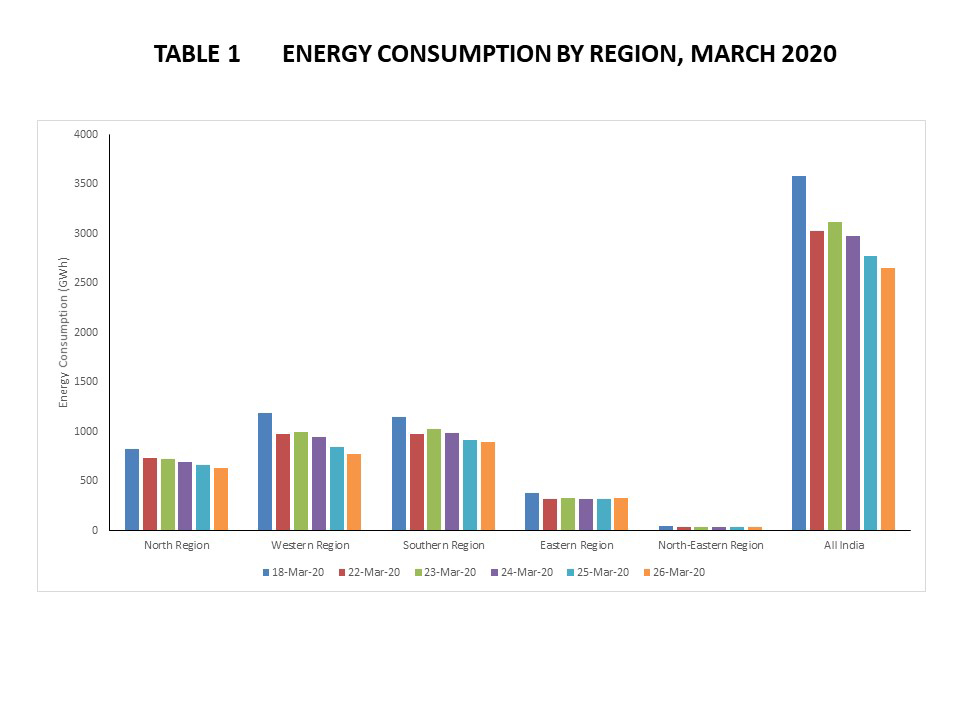 Electricity is considered as a part of essential services and thus fuel and plant availability are not constrained. However, if there will be any coal shortages in future (due to potential shutdown of mining activity), the country might see shortage of thermal generation. At present, the already surplus capacity has increased further due to reduced demand which is leading to reduced plant load factor (PLF). The availability of raw materials such as solar PV modules and capital equipment has been impacted in short term as the energy supply chain is disrupted badly. Due to non-payment of dues by DISCOMs to generators, there could be constrained supply of power as the revenue of generators is running short. This could further impact the ability of power generators to buy fuel for generation.

The price impact of COVID-19 on power sector can be summarized in the below mentioned points:

The spot prices on IEX have even touched three-year low of Rs. 0.6/ unit on March 25th 2020 (for a few time blocks). The sell bids volume is nearly five times the buy bids due to suppressed open access demand.

The utility finances reflect the finances, profits and expenditure that companies occur over a period of time. The outbreak of COVID-19 has resulted in:

The major impact on investment and capital expenditure can be summarized in the below mentioned points:

The outbreak of COVID-19 has caused many dislocations to the energy sector. However, it is expected that as the time passes and the pandemic eases, the mobility will increase and once again the economies will start functioning at the previous rates. This will help the power sector to boost up again. Once the factories will re-open, offices will start functioning from commercial spaces, the demand for electricity from commercial and industrial sector will pace up. From companies’ point of view, a more data driven and analytics approach that covers the impact on 4Cs which are cash, customer, costs and capital will be critical to assess.

Government along with the private sector can play a vital role in reviving the sector. The government is attending the large financing needs arising from COVID-19, the private sector can take care of large investments and expertise required for the power sector in developing countries. Apart from this, strong engagement with governments and local stakeholders will continue to contribute significantly to the development of the sector.