Seaweed Extracts Biostimulant Market is expected to grow with the healthy CAGR of 12.6% in the forecast period 2020 to 2027. The years considered for study are as mentioned below. 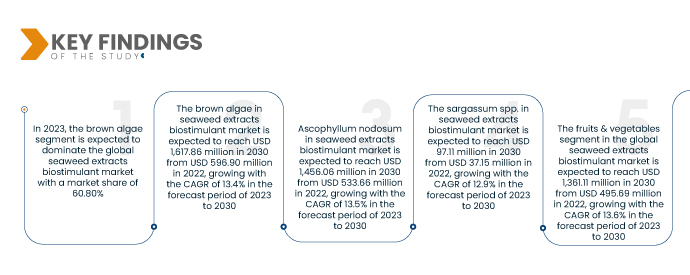 FMC Corporation headquartered in Pennsylvania, U.S. which was founded in 1883. The company is involved in the development and production of novel agricultural products such as insecticides & miticides, herbicides and fungicides. The company operates its business through FMC Agricultural Solutions, FMC Lithium segments. The company offer products including insecticides, herbicides, fungicides, seed treatment solutions, plant growth regulators, request for information, bio medical waste (Panoli) from which plant growth regulators is the market focus category.

The company has wide global presence across the globe such as Latin America, North America, Europe, Middle East and Africa, Asia-Pacific. It generates its revenue through subsidiaries such as Cheminova A/S (Denmark), Lithium Corporation of America (U.S.), FMC Quimica do Brasil Limitada (Brazil), FMC Wyoming Corp (U.S.), FMC Foret SA (Spain) among others.

VALAGRO SPA headquartered in Atessa, Italy which was founded in 1980. The company deals in manufacturing and distribution of wide range of products for nutrition and good health of plants. It offers product categories such as farms and industrials; with market focused category is farms.

The company has wide global presence across the globe such as North America, Asia-Pacific, and Europe. In addition to it, the company also generates its revenue from the various subsidiary companies such as Valagro Iberia S.L.(Spain), Valagro Hellas S.A.(Greece), Valagro Mexicana Mexico), Valagro do Brasil Brazil), Valagro Usa Inc. (U.S.) among others.