Ferrero, HARIBO of America, and Perfetti Van Melle are dominating the Asia-Pacific Gummies and Jellies Market in 2019

Asia-Pacific Gummies and Jellies Market is expected to grow at a CAGR of 7.8% in the forecast period of 2020 to 2027. The years considered for study are as mentioned below.

Asia-Pacific gummies and jellies market is a highly consolidated market, which includes specific number of key players as well as local players. The market has witnessed increased various strategic developments in expanding their production facility for manufacturing of different gummies and jellies various acquisitions and partnership to enter in specific market have led the manufacturers to established their foot prints.

The major players dealing in Asia-Pacific gummies and jellies market are introducing strong range of product portfolio. This has also helped the company to maximize the sales with enhanced product portfolio. For instance, In January 2018, Ferrero group acquired Nestle for 2.8 USD billion, with this acquisition Ferrero became the third largest company of confectionery in the U.S. market. The wide range provided by Nestle earlier will be now offered by the Ferrero, given its customers have a wider range of products and choices. 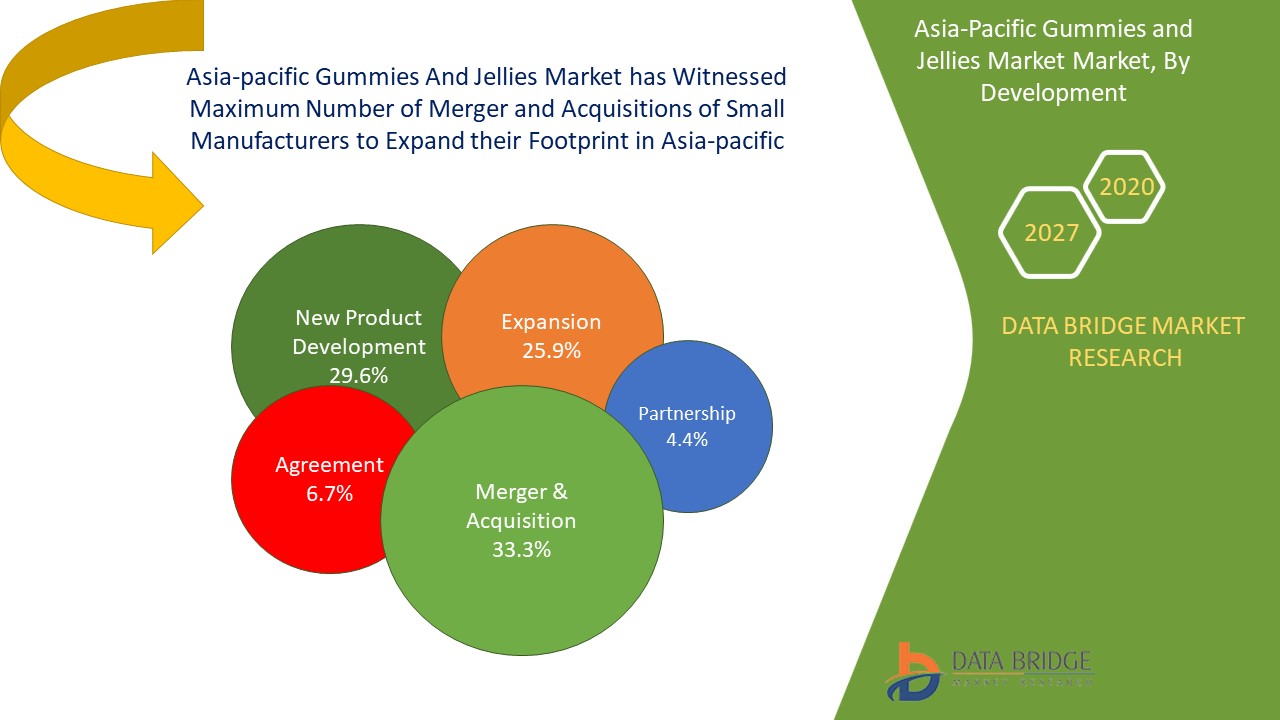 Ferrero headquartered in Alba, Italy which was founded in 1946. The company provides variety of products like gummies, jellies as well as the mixed candies. The company deals in several forms of candies including the gummy bears and other shapes. Ferrero is engaged in manufacturing various gummies and jellies of multivitamin for adults and candies for kids. The company deals in the brand categories such as Sweetarts, Trolli, BlackForest, Brach’s, LaffyTaffy ,NowandLater, Nerds, Bobs, RedHots, Lemonhead, Sathers, Jujyfruits, BostedBakedBeans, AtomicFireBall, JawBusters, Chuckles, RainBlo, SuperBubble, FruitStripe, FunDip, Pixx, Stix, OriginalSpree, BottleCaps, Nips, Runts, Gobstopper, StretchIsl and Ferrero among which trolli and Brach’s are market focussed brand categories.

The company has wide global presence across the globe such as North America, Europe, Africa, Oceania and Asia-Pacific. In addition to it, the company also generates its revenue from the various subsidiary companies such as Trolli (Germany), Brachs (China), Ferrero Candy Company (Italy) among others.

HARIBO of America, Inc headquartered in Bonn, Germany and founded in 1920. Company offers products of various forms of gummy candies. The company deals in different products including gummy bears, twin snakes, happy cola candies among others.

The company has wide global presence across the globe such as North America, Europe, Asia-Pacific, Middle East and Africa and Australia.

Global Gummies and Jellies Market – Industry Trends and Forecast to 2026