Stryker, Medtronic and Intuitive Surgical are Dominating in the U.S. Surgical Robotics and Navigation for Orthopaedic Market in 2021

The U.S. Surgical Robotics and Navigation for Orthopaedic Market is expected to grow with the CAGR of 18.1% in the forecast period of 2021 to 2028. The years considered for study are as mentioned below:

The U.S. surgical robotics and navigation for orthopaedic market is a highly consolidated market, which includes specific number of key players as well as local players. The market has witnessed increased strategic developments owing to favourable market scenario.

The major players dealing in the U.S. surgical robotics and navigation for orthopaedic market are introducing strong range of product portfolio. This helped companies to maximize the sales with enhanced product portfolio. For instance, in June 2021, Stryker announced the partnership with Texas Health Hospital Mansfield. Texas Health Hospital has adopted the full suite of Stryker products to support their journey to eliminate harm for healthcare providers and patients in the operating room. This has strengthened the relations between the two as well as company can earn more revenue. 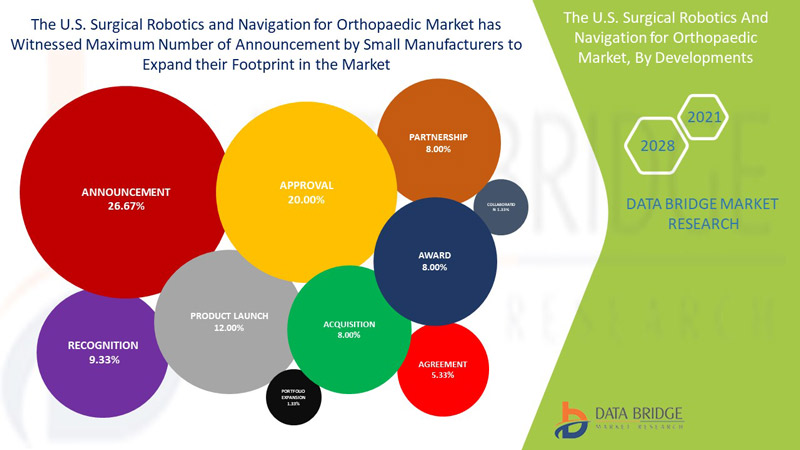 Stryker is headquartered in Michigan, U.S. and was founded in 1941. The company is dedicated to make healthcare better working along with customers. The company deals in business segment namely medical devices. The company has several products under categories such as medical and surgical equipment, orthopaedics and neurotechnology in which orthopaedics is the market focused category.

Intuitive Surgical is headquartered in California, U.S. and was founded in 1995. The company focuses on creating innovative, robotic-assisted systems that help empower doctors and hospitals to make surgery less invasive than an open approach. The company deals in several business segments namely instruments and accessories, systems and services out of which systems is the market focused segment. The company has several products & services such as Da vinci and ion in which Da vinci is the market focused product & service.

U.S. Surgical Robotics and Navigation for Orthopaedic Market – Industry Trends and Forecast to 2028

Stryker, Medtronic and Corin Group are Dominating in the Australia Surgical Robotics and Navigation for Orthopaedic Market in 2021